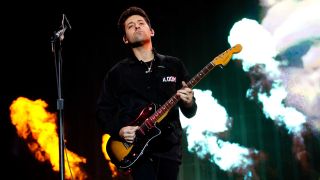 Ask Joe Trohman about his guitar collection and he’ll surprise you.

Citing Ry Cooder, The Rolling Stones and Jimmy Page as the main inspirations, Fall Out Boy’s axeman has been sticking with “my old Squier signature Teles that got made for a while” and laughs about very few others using such cost-effective tools for the world’s biggest stages. But, being a millionaire rockstar, he’s bound to have some more lavish instruments tucked away at home…

“I have this Zemaitis guitar, one of the old ones that are worth hundreds of thousands of dollars before his son Tony Jr. restarted the company,” grins Trohman, sat opposite MusicRadar in a trendy East London hotel.

“I’ve had the guitar for over a decade, it plays and sounds perfect. I simply don’t know any other guitar like it. Even though I’m more of a Tele guy, this is more Les Paul-esque though in fairness it does tons of things. It feels perfect, plays perfect, sounds perfect and has no problems whatsoever… which is exactly why I don’t bring it out on tour!

“Then I have a ’72 Goldtop and a ’69 Dan Armstrong in my living room because they look nice,” he continues.

“Plus a couple of vintage Gibsons, this ‘65 reverse-body Firebird, just like what Johnny Winter played. I also have a ‘62 Jazzmaster in Burgundy Mist which looks pink because it’s so worn! My parents got me a Fender book full of all the vintage colours - I got obsessed with all those old paint jobs, back when they used to use American car paint! I always wanted the weird ones, so my wife got me one!

Catch Fall Out Boy on tour this March and you’re guaranteed to see none of the instruments listed above bar the Squier - and probably with good reason. It’s very much the same philosophy behind the guitarist’s pedalboard, relying on the high-powered Fractal Axe-Fx for all the hard work while his more treasured units stay safe at home…

“I used to run a shitload of pedals, but it made my chain super-noisy so I took the plunge to Fractal for effects,” reveals Trohman.

“They sound great, they’re consistent and I know what I’m getting every night, plus there’s no nightmares trying to find out which cable has gone. In the past, I’ve had to plug straight into the amp and play something completely different because it might not translate without the effects! Most of the crowd wouldn’t notice, but I’d notice and get anxiety over it.”

While it’s currently sat in the effects loop, Trohman plans to promote the Fractal to a higher role within his rig sometime in the future. He’s more than confident it will live up to the task…

“Eventually, I will get into all the amp modelling and use Axe-Fx completely for everything in Fall Out Boy - but at the moment I’m using these reissue Sunn novelty heads, the Fender ones, which are way less coveted, but I like them. They work really well and I don’t have the gain up very high.

Understandably, playing in a crossover band like Fall Out Boy - who throw electronic sequencing and pop hooks into their kitchen-sink mainstream rock - means defying convention and tradition to some level. It’s something Trohman embraces wholeheartedly - ditching the guitar hat for a much wider, overarching view on their music…

“You have to remember: in Fall Out Boy, my guitars don’t really sound as much like guitars as maybe other bands,” he shrugs.

“You might hear something and think it’s not a guitar, but it is. It doesn’t even sound like one to me half the time! I don’t even change guitars; I have the hip-shot drop tuner thing just to knock it into drop D or whatever. The pickups are all original, to my ears… if it sounds good, it sounds good!”

Here, the Fall Out Boy axeman gives us five tips to guitar greatness…

“Making sure that you’re not overplaying is the hardest thing to do as a guitar player.

“Most of us just want to play and play and play, because the guitar is an instrument that lends itself well to being overplayed, haha! Diminished arpeggios would sound bad over our electronic pop or funky songs… seriously, it’d come out shit or corny.

“When you think about it, the guitar’s a bit of a dick… it’s like an extension of the penis. People like to jerk off a lot, and the guitar lends itself well to being jerked off! But maybe your orgasms could be more exciting when you have less of them? I don’t know… but it’s safe to say going up and down the neck can involve very phallic gestures. Have you seen the air guitar documentary that came out a few years ago? It was basically a bunch of people jacking off…”

2. Learn from who you love

“Find someone that you really like… don’t go to the jazz dude with one long fingernail and a ponytail unless that’s what you’re hoping to go into! You shouldn’t take YouTube for granted because there is someone out there doing a proper lesson on any technique you want to learn… guitar lessons are different now thanks to the internet.

“Also, pay attention to the songs you love. There’s a saying about stealing from your favourite artists - it doesn’t matter what you steal, it’s how you use it. At the end of the day, everyone is ripping everybody else off. So listen to your favourite bands and great songs; use it as a litmus test of baseline for what you want to do.

“I’m not saying copy the song ad verbatim, but learn the parts and mess around with them. Don’t fucking rip it off, but be inspired by them - which partly means starting with them. No-one will say that, because it’s like admitting they steal stuff from other people, but that’s obvious, it’s all everybody does. No-one is original.

“There’s that saying: ‘there is nothing new under the sun’ - and it’s true, everybody has taken from someone else. Any time I want to do something inspired, it will come out so fucking different to the influence because I have my own filter. Always use your own filter.”

3. Focus on your strengths

“I’m not a Malmsteen or a Satch kind of player. But I soon realised what I can do is attack many styles just by spending time in the studio and knowing how to recreate them live. That’s helped me understand a lot more about the sounds I hear in my head than a lot of shredders.

“Luckily, I have a studio at home, so I can sit there and experiment for long periods of time. That’s really helped translate my ideas to the Fall Out Boy live shows, as well as anything else I might do.

“You’ll hear great players like Steve Lukather from Toto talk about learning your theory and I agree - you have to learn basic theory - but after that, follow your own ear for it. Once you’ve learned the rules, you can then go out and break them.

“The hard thing about guitar playing is going in and fucking up a million times until you get it right. There are so many things to help you these days… I found The Guitar Grimoire was a really good book to get into alternate picking and it really helped mine improve.”

4. Listen to everything and anything

“I’m a metalhead myself, amongst other things. You go to a place like Stockholm, where there are a lot of great heavy metal bands, but in general when I talk to them, Swedish people seem to like everything. The metalheads there also like pop music and other genres, which is different to certain other places.

“I love guys like Billy Gibbons as much as I do the metal players. He’s a great example of an incredibly restrained player. A lot of that tone comes from the hands. You might think with the right gear and amount of gain, you can sound like that - but it’s not that easy. Noel Gallagher is another guy that plays to serve; he never overdoes it and his leads are pretty awesome. That guy is one smart player!

“I’ve learned over the years to use less gain like these guys and get more out of just my hands. Patrick [Stump, FOB frontman] once asked me how I got a certain guitar tone when we played on Jimmy Kimmel and it had zero gain on it… I had no answer. It was just in my hands!

“The idea of what is heavy is like a philosophical question: when you are young, you think tuning down and cranking up the gain makes everything heavy. And sure, it does, but if you can get the noise out of the way, a Tele can sound ridiculously cavernous, dark and heavy! There’s a misconception that a guitar needs to be a specific model going into a specific amp, like an Ibanez or Jackson through a high-powered Marshall. It all works… it just depends on what you’re going for!”

5. Remember that your guitar is your voice

“Listen to Slash’s guitar solos - they are super musical and singable. Both solos in November Rain are great; I especially love the first one where he’s holding those notes so beautifully. It should be a goal for any guitar player to find their own voice. I can recognise a guitar player’s voice more than I could a singer’s, I think!

“I like that late-’60s/early-’70s feel when it comes to vibrato. That’s almost 80% of guitar playing to me. It’s all about the guys who really know how to hold a note. There’s so much vocalisation and emotion that comes through vibrato. Especially compared to crazy sweeping when it’s just being done to show off… I find that kind of playing really off-putting.”