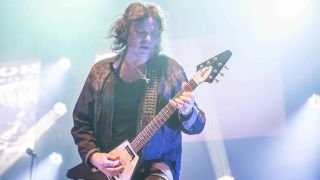 Recorded at Abbey Road as spring dawned earlier in the year, Europe’s 11th full-length, Walk The Earth, is yet another masterclass in melody.

The Swedish rockers have been on quite the roll since 2009’s Last Look At Eden - stepping towards more of a ‘classic heavy’ crunch that owes more to Deep Purple than anything heard on their own chart-topping sounds of the ’80s.

As fate would have it, this time round, guitarist John Norum brought in a Marshall bass amp (amongst his usual selection of trusted Marshalls) to dial in those creamy vintage tones he’s long been renowned for…

“I actually used this 50-Watt Superbass from 1971… for bass guitar!” he begins, after telling MusicRadar how much he’s looking forward to the UK arena tour with heroes Deep Purple in November.

“It sounded really cool with a treble booster, and that’s probably been the latest addition to my setup. Otherwise, it was the same old JCM800s I’ve used for the past 20 years. I’ve tried every amp on the planet and I always end up going back to Marshall. It just fits guitar music, you know?

“As for guitars - it was just Les Pauls, Flying Vs and Fender Strats. Classic guitars - no fancy business or funny shapes or anything like that…. just the old-school stuff.”

And true to his word, the sounds are staggeringly organic - using little in the way of effects or outboard gear to maintain a sonic purity which few ever come close to. The guitarist explains how it’s something he learned, just like everyone else, from his heroes. After all, less can be so much more…

“Michael Schenker and Gary Moore are probably my main influences,” he continues, on his preference towards more raw and direct guitar tones.

“I grew up listening to them and played along to the albums learning all the stuff. Schenker was always so tasteful in his playing; he had all the beautiful melodies - and then when it came to burning through pentatonic scales, Gary Moore was number one for me. I like it when a guitar player does things that sound impossible to play, basically!

“When Gary Moore goes off on those blues runs… no-one can play like that. He was just born with it. You can get close, though I don’t think it’s not something you can learn. You have to have the body for it: the fingers, mind, that kind of thing…

“Gary was left-handed, too,” notes the guitar player, “which gave him a certain tone playing right-handed. That’s why there’s an amazing tone, because there’s this strength in his left hand.

“He reminds me a lot of Django Reinhardt in ways; I hadn’t realised that until a couple of years ago when I was watching old footage of Django, thinking it sounded like Gary Moore or the other way round. That type of vibrato, and pretty much sticking to using two fingers… because, in Django’s case, that’s all he had. Little things like that can give your playing such a unique character.”

“First of all, I must stress vibrato how important vibrato is. You can be technically amazing, playing a thousand notes a second, but if you have a bad or horrible vibrato… you’re a goner! If you have a good vibrato, it doesn’t matter how fast you are.

“Nowadays, the focus is so much on speed, people have forgotten about bending notes and holding notes, or showing some kind of restraint.

“I see it on YouTube all the time: super-fast players that forgot to think about timing and vibrato - and those things hold the key to sounding good.”

2. Use all your fingers

“Whenever I want to play pentatonics at a hundred miles an hour - which, admittedly, is a lot of fun - I’ll anchor my first finger in whatever key the song is in and do pull-offs with the second and third fingers.

Europe's Joey Tempest: how I wrote The Final Countdown

“I stole that approach off Michael Schenker - he does it all the time, haha! I found it made me able to play twice as fast… a lot of people don’t use their fingers to their full advantage.

“You can always double your speed if you throw another finger into it and start doing pull-offs. I look at it almost like a circle that goes round and round. You can use these stretches all over the neck; that’s how I developed the speed in order to play blues runs super-fast.

“Though I will only do it if it fits the song, which I learned from Schenker’s work in UFO. When it was time to burn, like on the live version of Lights Out, he goes insane but it’s always tasteful.”

“So many guitar players use way too much distortion for my tastes. One of the best tones I’ve ever heard was on Deep Purple’s Made In Japan. There’s sustain but it’s clean. You can hear every note. You can hear the strings.

“I’m not into the distorted, super-fuzzy stuff… when you do open chords, you should hear all the strings ring. If it’s mushy, you need to turn down the gain.

“If, however, it’s too clean, I’ll push one of my Xotic EP Boosters in front of me just for a tiny little push. It adds a few more dBs rather than gain. It’s like an Echoplex, basically, but without the echo. And I’m not using that all the time… I only kick it in when I need to hold notes a bit longer or when I’m tired and my fingers are feeling like they are about to fall off. It’s a good little helper along the way.”

“I’m more about the melodies than scales out of a book. This is really important: if I’m playing over a ballad or slow song, I’ll look for a nice melody. I might hear something in the vocal that would be cool to put in the solo with an added harmony to it.

“I’m not really into scales that much, being more of a blues dude. I mainly stick with the pentatonic - some people might that’s boring, but to me that’s all the fun stuff. I’m not into neoclassical stuff; I’m more about the hooks.

“A good example of melodic playing is Still Got The Blues. I mean, that’s one of the greatest guitar pieces I’ve ever heard and it’s all slow, apart from one burning lick at the end of the main solo. And that’s enough - that’s plenty! I think it’s that kind of playing which touches the soul… and sure, you can always add a little flashy stuff in the middle.

“Another one is Stairway To Heaven: one of the classics despite being pretty slow - that solo is timeless. It sounds as good now as it did the day it came out.

“I’ve burned through scales in the past, but I got sick of it fast. There was one song on a solo album of mine that had Yngwie Malmsteen-style neoclassical runs from beginning to end. It came out great, and sure, I had fun that day… but it didn’t give me much joy or say anything beyond that. It almost made me feel uncomfortable, and I decided right there and then to never do it again, at least in that way.

“As you get older, you realise that kind of playing doesn’t have the same lifespan. It will feel exciting for a week or a month - if you’re lucky - and then it kinda disappears.”

5. Try not to overthink it

“When I listen to Michael Schenker, it doesn’t feel like he’s thinking about it much. It’s very natural, so with our up-tempo songs, I just kinda wing it and hope for the best in a similar way!

“Sometimes I’ll pick all the notes with the right hand, other times I’ll stick with legato stuff or mix it all together. I don’t think two strokes down, one up, two down or any patterns like that.

“It’s good to play on one or two strings to get your right hand moving up and down, because it’s easy. When you try alternate-picking across all six really fast… that’s when it gets hard. So sometimes I’m faking it live, just using the high E and B to do a run from beginning to end. If I try to cross loads, I might get stuck - but of course, in the studio I have the time to get it down. Ritchie Blackmore is a good example of playing super-fast on one string.”

“To write, I just play all the time. I play every day… even now, I’ve just finished after about four hours. If you’re lucky, a riff will pop up out of the blue. So I’ll record it and keep on playing. I never wake up in the morning and think I have to write a riff before lunch. Just play as much as you can and it will come by itself.

“Sooner or later, you’ll find something that sounds interesting. Record it and come back to it later - you might realise that it could work alongside something else. Take it to the band and everyone can add their own ideas to it, too.

“We work as a team in Europe. It never feels like a finished song until I bring it to the band. That’s how we’ve been working for the last three or four albums.”

Walk The Earth is out now via Victor Entertainment.