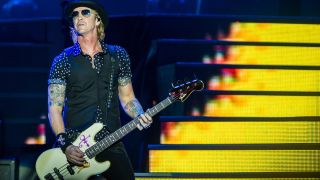 It might sound strange, but Duff McKagan’s new solo album Tenderness was originally meant to be a book.

After penning a series of observations - or chapters, as he originally intended, for the follow-up to 2015’s self-help memoir How To Be A Man: (and other illusions) - there was this sense that his creative urges hadn’t been fully realised or satisfied.

The 11 tracks that soon followed have turned out more rooted in country/folk Americana than anything he’s put his name to in the past.

Speaking to MusicRadar ahead of this Autumn’s European tour backed by producer/co-writer Shooting Jennings and his band, the legendary four-stringer reveals how his experiences penning for Seattle Weekly and ESPN and performing on the highest grossing tour of all-time with Guns N’ Roses brought all kinds of artistic inspiration...

“After a bunch of columns and a couple of books, I felt my writing chops were up,” laughs McKagan.

“It was going to be this socio-political-observational book. I wrote so many columns, over 500 altogether, and when you do that you become an observationalist… because you gotta write next week’s column! You’re always taking stock of situations and wondering whether they would make for a good column.”

Being on the biggest tour of his career, and music history in general, certainly gave the musician more than enough situations to take stock of. McKagan describes himself as someone who has “gone around the world a bunch of times and seen a lot” but more than anything else, he’s found himself talking to people - taking into account their experiences during what he describes as “arguably some of the most interesting historical times of my lifetime”.

“Right now, you turn on the TV or Twitter and people are just screaming away, especially on American news,” he reasons.

“There was this great divide they were talking, or actually screaming, about - putting labels on people like elite, snowflake etc. I didn’t know what any of this shit is.”

The Guns N’ Roses bass player became more and more aware of how much money was being made in broadcasting with the sole purpose of making people angry. At one point even he got sucked in by it, something which, in turn, probably exasperated him even further…

“We did this American tour and I was well into the news,” continues McKagan. “I was watching it like a soap opera, because that’s what it was! Then I went back to being a punk-rock guy thinking, ‘They’re just trying to sell ads and keep me on this story they got going!’ Those channels banking it during the commercials. Then the news shifts and they move on to the next story, the big story that everyone has to know about...”

As fate would have it, travelling far and wide on the Not In This Lifetime… tour brought with it some much-needed detox all the hyperbolic noise and sensationalist headlines in his home country. For his mind, the silence was as vital as it was golden.

“But man, when you turn off the news and social media, and you’re just out there doing shit… your quality of life can become so much better,” admits McKagan.

“I stopped looking at Twitter ‘cause it was winding me up so much. That felt like a really interesting idea to write about. So that’s where the first song, It’s Not Too Late, came from. It was going to be a chapter in a book, like every song on this album.”

Once the decision had been made to turn his words into songs, McKagan found himself strumming three-chord riffs into Garageband and singing over them on various legs of his old band’s long-awaited reunion tour. Now the album has been completed, his aim is to “bring some connectivity through the music”.

One of the tracks, Falling Down, was inspired by the rise in homelessness in his hometown - the songwriter noting how this epidemic is one that spreads across the globe. He describes what he saw in Seattle’s homeless camp The Jungle as “some post-apocalyptic shit” where there was “one guy whose eyelid had been eaten off by a rat because he’d nodded off on heroin”.

He chose to sing about and actively become involved in these issues because “we have to know what we’re dealing with, which is realising these people are just like us.”

Elsewhere on the record, Feel is his tribute to some fallen friends in Scott Weiland, Chris Cornell and Chester Bennington, as well as personal heroes like Prince, while Wasted Heart revisits an older track from his Loaded years that “came from my own story of addiction” and is his way of saying “there is hope, there is a way out… I am one of them”.

“All of these songs have a bigger intent that people will hear more about soon,” continues McKagan.

“I realised it was a time for healing. I’ve read enough history to know these issues will pass. This kinda unrest has been happening everywhere. They seem super-important at the time and most people learn from history. Not just in America... you guys in England have your own thing going on there, man!

“I found Brexit so confusing at first, I couldn’t understand what the fuck was going on. And then I did - it was a campaign that was kinda dangerous. Then came that vote where everyone thought it would never actually happen, so people didn’t show up to vote. And then it passed! The UK is democratic, it had to go where the voters say and now it’s like, ‘Oh shit… now what?!’

“Wherever you look, from attacks in Europe or school shootings in America or poverty in South America, it feels like we are living through some really brutal shit. The point of this album is to bring back a little more connectivity and compassion… that’s what I’m hoping for, anyway.”

On that note, here the Guns N’ Roses icon gives his five tips for bass players...

“Okay, you ready?! Finding a good drummer is number one. You need someone you can lock in with that can also listen to the rest of your band.

“Don’t put a fill in every time the drummer puts a fill in. If you really wanna be good, work out those fills together. Make sure it’s not where the guitar player is doing their thing, because guitar player’s always wants to do some fuckin’ fill! And also figure out where the singer is singing.

“I’ve discovered that I did work harder with our drummer [Steven Adler] and came up with the right fills for songs like Out Ta Get Me or My Michelle or Welcome To The Jungle. We didn’t overplay them. So listening back now, I’m stoked with myself as a young kid. I think to myself, ‘Oh, you did the right shit there!’”

2. Serve the song, first and foremost

“This is an important thing to remember. If you are a bass player and you want to be the front-centre guy… well, let’s just say that usually won’t happen for you. Unless you’re Lemmy! If you want to do that, use him as your guy.

“But generally, less is more as a bass player. I’ve really been learning that the more and more I play. I’ve been using less notes on this Guns N’ Roses tour than I did back when we were originally playing these songs.

“Bass playing is about the fuckin’ groove. Your band is gonna suck unless you and your drummer have got your shit going on. The band is only as good as its rhythm section. A lot of the times, it’s only as good as the bass player, haha! That’s the musician who has to calm the drummer down and get them to sit in the groove.

“It’s not about how fast you can play or how rippin’ you can slap a bass. It’s rarely about that. Sometimes Prince would showcase the bass player, and it would be great, but generally those cases are rare…”

“Fairly recently, over the last 10 years, I’ve gone back to taking bass lessons. I’ve been learning Larry Graham stuff and Deep Purple, the latter of which is just shredding in G minor, haha! That’s a great way to learn the neck in minor. Do stuff like that.

“Learn from someone like John Paul Jones for dexterity, something like Immigrant Song, which he actually plays with a pick. Do those weird major runs with a minor seven during the build-up and learn how to play them fast. Those are great warm-up songs before you go out and play on stage. Those are the kind of bass players I really appreciate.”

“Sure, learn how to play like John Paul Jones and all those guys I mentioned. But also go back before that and listen to musicians like James Jamerson. Learn as much as you can about the roots of it all. If you're going to be a bass player, learn how not to be the front guy.

“Jamerson played in the studio, but you can learn those grooves and use them live. Then do something totally different, like listen to post-punk like Killing Joke or Motörhead! Figure out where the bass fits in all the styles of music that interest you, and learn how to apply ideas that work.”

5. Ultimately, find your own sound

“Then become your own guy or gal! Take all that stuff and wrap it up into your own thing. I played bass on this new record of mine, as well as playing acoustic guitar and singing, so I watched our drummer Jamie Douglass and observed everything he did.

“After seeing it three times, I went into the control room and played over those beautifully sparse drum parts. He thinks more in terms of what he didn’t play… sometimes I want to get my groove on, but a lot of the time it’s just about being in that pocket. The pocket is the most beautiful thing for a bass player.”

Tenderness is out on 31 May via UME.