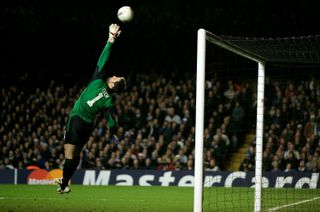 Chelsea goalkeeper Petr Cech is, it turns out, quite the drummer. Today he's going to be playing at Czech music festival Rock For People with Eddie Stoilow, on a bill that also includes Queens Of The Stone Age, Foals and 30 Seconds To Mars.

What is it with goalkeepers and drums? Manchester United legend Peter Schmeichel once revealed his love of drums and drummers to Rhythm: ""I suppose most people won't know who they are, but my heroes are drummers, and specifically drummers who have played with Sting since he left The Police. Guys like Omar Hakim, Manu Katché and Vinnie Colaiuta.  I would go and buy videos of just these guys and watch them. I have always felt a lot of empathy with drummers because it's a bit like being a goalkeeper: you're behind the rest of your team."

A dog, that can play drums. And can be given musical direction better than most guitarists we know.

A bunch of vids showing drummers hitting themselves in the face. Ha ha ha owww.

After last weekend's reminder of Arctic Monkeys man Matt Helders' undoubted skills at Glastonbury, we were impressed to see Callen 1034 give the Monkeys' 'D Is For Dangerous' a good workout.

f you've done a drum cover you're particularly proud of, or if you've seen an awesome one recently - email us at rhythm@futurenet.com!