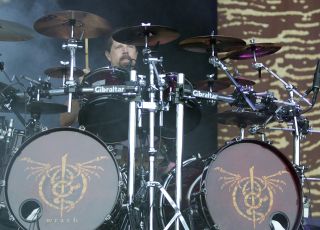 Lamb Of God have announced their Metal On The Mountain retreat, a week-long event featuring Chris Adler drum clinics and guitar clinics from his brother Willie and Mark Morton. Bass player John Campbell will be running motorcycle excursions while there will be a seminar on primitive fire building by frontman Randy Blythe. No, we're not making this up. The retreat, which is limited to 170 fans, will feature activities aimed at musicians and non-musicians, and takes place at the Full Moon Resort in Big Indian, New York from July 15-19. There will also be nightly jam sessions with the band and fans, band Q&A, a premiere of the forthcoming Lamb Of God feature film and more. For more info go to metalonthemountain.com.

Here's the most thorough look at the Amen Break we've ever seen. Explaining the origins of the most sampled ever drum beat from The Winstons' 'Amen Brother' to its core place in D'n'B tunes, it makes a fascinating read and watch…

This never gets old. Animal and Buddy Rich in an awesome drum battle on the Muppets in 1980. The drumming is of course, really Animal. With a bit of help from big band legend Ronnie Verrell…

In a later interview, Buddy recalled the show: "The thing that's good about it is, I felt like a Muppet myself; I was like a kid, playing with those guys, because that's how they made me feel. Singing the song was a knockout to me: the silly karate thing with Miss Piggywas beautiful, I thought; the playing on the walls, chairs and everything was a great idea of theirs. Then, of course, the battle at the end with Animal; to play opposite Ronnie Verrell -one of my all-time favorite drummers, along with Kenny Clare—was a total gas to me. That one week will go down as one of the most positive weeks in my career. I loved it—and I thank them."

One of the best live pop performances we've ever seen. This band is so tight, it makes this Justin Timberlake medley a pleasure to watch - that's the truly awesome Brian Frasier-Moore on drums…

With the return of Paramore - we've got a review of their new album featuring Ilan Rubin coming up next issue - we thought we'd let prodigious drum coverer Cobus Pogieter show off his skills on Paramore's 'Monster'.

If you've done a drum cover you're particularly proud of, or if you've seen an awesome one recently - email us atrhythm@futurenet.com!

PUMPING ON OUR STEREO

You can't deny the massive impact David Bowie has had on popular music, with a V&A exhibition 'David Bowie Is' pulling in record ticket sales -the fastest-selling show in its history with 50,000 ticket sales in advance of its opening tomorrow. He's also made the most spectacular comeback with a brand new album, The Next Day, drawing critical praise. And we've been listening solidly all week to his best work for two decades. Hats off, Mr Bowie - some nice drumming from Zachary Alford and Sterling Campbell too.