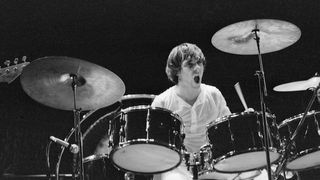 Moonie - The king of the trashed kit (Image credit: Bettmann/CORBIS)

Earlier this week we shared this video of a young bass player ending his band's talent show set by having a go at trashing his bass. The results were quite frankly a little bit pathetic.

Yup, everyone knows if you want some gear smashing to pieces you should go straight to the drummer. So we've found a few sticksmen to show this poor, misguided young bassist how it's done.

Green Day's hyperactive sticksmen has gained a reputation down the years for trashing his drum kits. Although back in a 2009 interview with Rhythm he did reveal that he thought this habit hit Slingerland hard. Mainly in the pocket.

He said: "I kind of killed off Slingerland. That was back in the time when I would smash a drum set each night and set it on fire and I think I put them under financially.

Moonie was so well-known for kit trashing that he gets two entries here. If you want a kit smashing, Moon's your man. First he kills his kit...

And then he makes Pete Townshend deaf...

A kit trashing with a difference. It would have only trashed itself once the sun came up, anyway.

The Catman loses it. We wonder what Gene and Paul made of this.

Ok, it's a little generous to call this a kit trashing, but Mike Portnoy gave his kit a little punishment during this Manila show due to rising anger at the performance of the local crew.