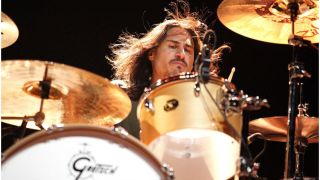 Mere mortal drummers everywhere take a sigh of relief: It seems that even rock heroes get nervous sometimes.

Tony Iommi has told wweek.com that Brad Wilk suffered a few jitters when he came into the studio to lay down drum parts for Black Sabbath's latest album, 13.

The guitarist revealed: "Brad had no idea what we were gonna be doing. We wouldn't let him hear the tracks with drums. We just wanted to see what he was gonna put to it. And Brad was a really nice guy. He did work hard, you know, because he was thrown in the deep end so much, and he was very nervous. And then he got used to us. He got used to our jokes, the way we prank around."

Iommi added that, before settling on Wilk, the band had considered some "very big name drummers" to replace Bill Ward, who was sidelined due to a contractual dispute. One name thrown into the pot by producer Rick Rubin was Ginger Baker, but Iommi was having none of it.

He added: "Rick suggested Ginger Baker, which we put a stop on. We didn't think Ginger Baker would have been… we didn't want to go in the studio and have, um, problems."

Earlier this week, prog king Carl Palmer let it slip that he had been in the running to join Sabbath for the 13 sessions but was unable due to scheduling conflicts.