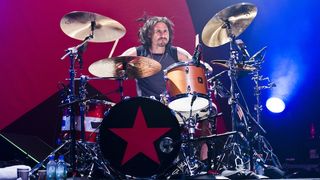 The future of Rage Against The Machine is uncertain, with reports suggesting drummer Brad Wilk, Tom Morello and Tim Commerford are set to launch a new project without frontman Zack de la Rocha.

Whether or not we see Rage back in action, they have left a wealth of classic tracks, and here Wilk speaks to us about perhaps the most infamous song in the band's catalogue - Bullet In The Head.

"It was one of the first Rage songs ever written. It was recorded at Sunburst Studios for our first demo, and recorded before we had even played our first show. We were just going to sell the demo at shows. We never thought record companies would be interested in a band that said 'F*** You' 16 times in a song! But at our first show there were tons of people wanting to sign us.

"When we went in to re-record the track for our first major label record, it never sounded as good as our first recording, so we ended up remixing the original. It just had the right stuff."

What were your impressions on first hearing the track?

"I remember playing the first half of the song and we thought it sounded great. We got to the end and Tom (Morello, guitarist) came up with this riff and we rocked it really hard. Zach (de la Rocha, vocals) didn't, he really wanted to rap, but we persuaded him. He belted it out and it totally tripped me out. I remember thinking, 'Oh, this is what we are, this is gonna be great'. It was a niche that I'd not heard before and it seemed like the moment we became Rage Against The Machine."

How did you approach the track? What made you play what you did?

"I approached the whole Rage Against The Machine sound in a particular way. I put an ad in a magazine called The Music Connection. Tom, who answered the ad, was on the same page. We got together and played music with no pre-conceived notions of how it should sound. I was into Clyde Stubblefield, Led Zeppelin and Black Sabbath and wanted to use those influences in a band. It was when I met Tom that it came to fruition. I knew there was something there."

What set-up were you using?