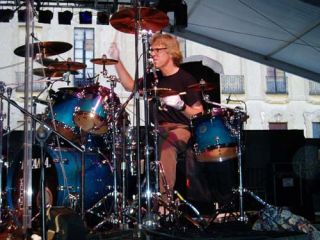 The Police drummer has apologised to Chilean President Michelle Bachelet for comments made to Chile's Mercurio newspaper during an interview published in October. The newspaper quoted Copeland as saying: "Look, the future president of Argentina would be good for one beer; yours (would be good) for four."

The meaning behind these comments are unclear although many, including the Chilean government, took them to mean he found Bachelet, less attractive than Argentine president-elect Cristina Fernandez de Kirchner, who will be her country's first elected female leader.

In a letter to Bachelet, Copeland wrote: "I was mortified to learn this remark reached you and you were asked to comment on such a trivial matter.

"If by chance you are able, Sting, Andy (Summers) and I would welcome the opportunity to personally express our admiration for you and your wonderful country by extending an invitation to you and your guests to attend our performance."

The Police are currently on the South American leg of their reunion tour but Bachelet has yet to reply.