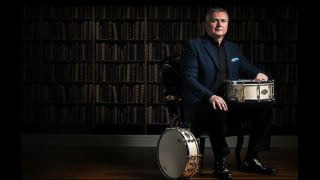 It's been quite a week for Premier, first announcing Steve White as their new head of education and then unveiling the mouth-watering Modern Classic drums.

Rhythm spoke to White about his new role and he is champing at the bit to get stuck in.

On how the position came about, he said: "I was formally approached after the NAMM show, the management had an idea for a role and I'm pleased to say that I was identified to fit the bill. I told my friends at Mapex my plans and out of courtesy we then left it for three months.

"I will be working on promoting the brand via education, setting up a network of countrywide associate teachers, helping and assisting with clinics and developing the online presence."

He added that he looks forward to working with Premier's expert drum crafter Keith Keough as the company builds on the huge success of recent lines such as the ONE series.

White said: "I've spent a lot of time with Keith at Mawdesley and I love getting my hands dirty."