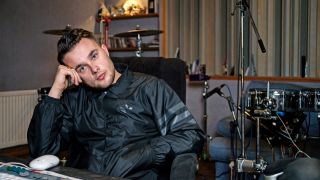 Brit grime-punk duo Slaves smashed through with their stunning 2015 debut album, before following it up with the superbly-received Take Controll at the back-end of last year.

We caught up with drummer Isaac Holman to talk all things Slaves.

Take Control is produced by Mike D of the Beastie Boys, how did that link-up come about?

"He was working with someone else on our label and he got hold of our record and liked it. He got in touch with Laurie [Vincent, guitar] and had a chat with him. We were supposed to go to Mike's place and do some demos to see what happened. But we ended up going over there and calling our management and telling them they had to let us stay there because we wanted to do the album with him. We're huge Beastie Boys fans, so to have Mike now as a friend is wicked."

Did he have a big say in your drum parts and sound on the record?

"He was hands-on in the studio. Up until then we hadn't really let anyone into our creative circle, usually it's just me and Laurie and we're really precious about it. It was like Mike joined the band for a little while and it worked. Mike is big into his drum sounds and spent a lot of time tweaking things and swapping things around so it sounded right. The kit still sounds raw, I want it to sound raw all of the time. Mike had a better ear for it than me, my ears aren't tuned like his are. We swapped the cymbals and snare out from time to time."

He also guests on Consume Or Be Consumed...

"The track was almost there and it needed another section but we weren't sure what to do with it. We had this plan to get Mike to guest on it. We were close to sacking the tune off because Mike wasn't really feeling it. He was playing the demos quite a lot in his car and I think it was his kid that said it was their favourite song. So, Mike called Laurie and said we needed to finish the tune. Laurie asked if he wanted to rap on it and he just said yes and got working on it."

Of course, we have to ask you about the track 'F*** The Hi Hat'. Does that sum up your approach to drumming?

"I remember the phrase was floating about because I don't use hi-hats. I was just shouting it and Laurie started playing this hard riff. The song's only about 40 seconds long. It's a bit of a fun, a bit tongue-in-cheek. Right after that there's a song with a hi-hat on it."

Do you enjoy geeking out on the gear side of things?

"I recently have been sorted out with some drums from the British Drum Company. It turns out Al Murray is a fan and he sorted us out. I'm using a 20"x20" bass drum on its side and a 14"x7" snare. I've got some Zildjian Heavy crashes coming as well that I'll be using. I just beat the kit as hard as I can, as long as I have some big heavy cymbals then I'm fine."

That approach must make touring a punishing process?

"We've been on tour for 11 dates and have five left and my body is feeling it. I have to be fit otherwise I can't get through a 45-minute set."