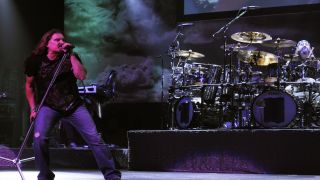 Mike Portnoy has admitted that he would re-join Dream Theater if asked, but doesn't expect the call to come.

The drummer, currently promoting the debut album from his new project The Winery Dogs, told Radio Futuro: "I would do it [rejoin Dream Theater] in a heartbeat. They are the ones that have closed the door on it.

"I've only needed a break, and I've had that break. So I'm ready, willing and able. But I honestly don't think they ever will; they've closed their door on it and I think they're too headstrong in having to prove themselves without me. So I wouldn't count on it. But my door is always open."

The Winery Dogs' self-titled debut is out now.