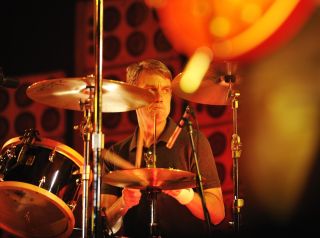 Matt Cameron at the kit

Now this we have to see - Matt Cameron, Zach Hill and Janet Weiss have joined forces and formed Drumgasm.

The all-star drumming collective will release their self-titled album on 27 August, and by the sounds of the statement posted on jackpotrecords.com, it sounds pretty special.

"This record is a document of what happens when Matt Cameron, Janet Weiss, and Zach Hill - three of the most remarkable drummers of late period rock & roll, who's collective roll call of bands - Pearl Jam, Sleater-Kinney, Hella, Quasi, Soundgarden,Wild Flag, Death Grips, Boredoms - have had a heavy impact on all levels of rock & roll from full blown arena rock to the radical fringe underground, set up together in a room & just commence to EXPLODE."

For more details head over to www.jackpotrecords.com.