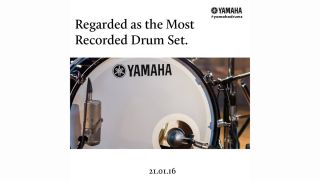 NAMM 2016 PRESS RELEASE: Yamaha is pleased to announce that the famous Recording Custom Drum Series has been re-designed with Steve Gadd and will be released in 2016.

Originally launched in 1975, the Recording Custom series (or 9000 series as it was known then) has become the industry standard drum set admired by world leading drummers, engineers, studio's and hire companies around the world.

Regarded as the most recorded drum set in history, the all birch design was instrumental in shaping the modern drum set as we know it today including shell construction, interchangeable hardware and high gloss lacquer finishing.

40 years on and Yamaha will release a totally new design, having worked on a detailed three year R&D program with legendary drummer Steve Gadd to enhance the character of the drum set and consider demands of drummers today.

Steve Gadd explained, "For the past three years I have been meeting with the research and development guys at Yamaha with the aim of bringing the Recording Custom Series up to date. I told Yamaha what I thought throughout the process. The result is that everything is a step up, yet they still feel like the Recording Custom. I think we did a great job, the drums sound great and am excited to see them unveiled so people can see and importantly hear them."

Rhythm was recently invited to visit the China factory in which the new Recording Custom kits are made and we will have a world exclusive first review coming in our issue on sale 9 February.