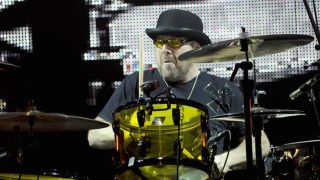 Jason Bonham has his sights set on playing a drum solo with a hologram of his dad, Led Zeppelin's John Bonham.

Bonzo jr, who has been touring his Led Zeppelin Experience show on and off since 2011, told Legendary Rock Interviews of his plans for the project.

"It's imperative that I continue putting together the best shows and take it to the next level," he explained. "I'm talking to people about holograms, and my dream is to do the hologram drum solo with dad next to me. That is my goal, my dream and we're just trying to figure out everything that we can do with this show."