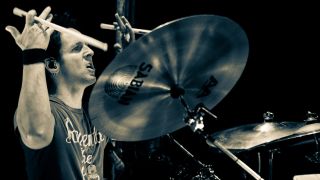 Glen Sobel talks about the night he'll always remember... and the one he wishes he could forget.

Over the course of his career, Alice Cooper drummer Glen Sobel has developed a set of skills and strategies that have served him well in a variety of different playing situations. "It's important to know how to read music and to be able to make a cheat sheet for yourself," he says. "You should have those abilities at your disposal. But the biggest thing I've learned, and this is vital when you're stepping into a new situation and subbing for someone, is how not to choke when playing in a room full of skeptical people."

Sobel likens it to a subtle form of psychology: "Caring about the gig but not caring too much to the point where you blow it," he explains. "It's definitely a trick, a kind of disconnect you have to achieve." The versatile player was able to put this idiosyncratic mental preparation to good use in 2010 when he received an emergency call to sub for an injured Matt Laug as the drummer for Italian superstar Vasco Rossi.

"The first show I did with Vasco has to rank as my best ever, for a variety of reasons," Sobel says. "Forty thousand people, a real trial-by-fire situation. I definitely had to be in the right frame of mind to make it work."

The prep time was minimal: Sobel had three days to learn 26 songs he'd never heard before ("Everybody in Italy can sing these songs by heart, but they were new to me"), after which he had to fly to Italy for an afternoon rehearsal with Rossi's band.

"There was a lot of pressure involved, because quite frankly, the tour was in jeopardy," he recounts. "The guys were cool, but there was tension in the room, and I knew why - I was the wild card. Could I cut it? The venues were booked, the tickets were sold, and there were something like 70 people in the crew. Everything was riding on me. The rehearsal went well, but a gig is still a gig - anything can happen."

The next night, before an overflow crowd at an open-air show on the Island Of Sardinia, and with a drum tech clipping cheat sheet pages to a music stand with clothespins, Sobel tried to keep everything in perspective. "I was thinking about the gig, but I wasn't trying to put on my best performance," he notes. "I was concentrating on counting nine bars instead of eight and things like that. By concerning myself with the minutia of playing, I hoped that I wouldn't psych myself into overthinking what was happening around me."

Midway into the set, Sobel was required to play a tricky "Keith Moonish-type fill" that would lead into an abrupt tempo change of one of the songs. "In my head, I knew the moment was coming and that it would be a rest test," he says. "Vasco kind of stood there and looked at me like, 'OK, let's see if you have this.' But I had done my homework, so I was ready. After I played the part, he came over, reached over the drum riser and shook my hand. It was like he was going, 'You did it, man!' That felt pretty good. At that moment, I breathed a little sigh of relief. I knew I had it all down."

In all, Sobel played 13 shows with Rossi before Laug returned to the fold. "By the end of my run, I was feeling pretty comfortable," he says. "Was the tenth show better than the first? Probably. But getting through the initial performance was the biggest worry, so it was also the biggest thrill."

Years before his onstage triumph with Vasco Rossi, Sobel and a few of his buddies, having graduated from El Camino Real High School in Woodland Hills, Californial, formed a hard-rock outfit called Bourbon Street. They had big drums, big amps and big dreams, but not a lot of big gigs. "Booking shows was a real mystery," Sobel says. "If you didn't know somebody, you couldn't get anything going. And I guess we didn't know anybody."

Finally, Bourbon did know somebody, and they scored their first LA club show. Over the moon with excitement, the band rehearsed like demons and made sure that all of their friends would be there on the big night. In all of their fervor, however, the band overlooked two key bits of information: One, the club had a strict 'no cover tunes' policy, which would present a problem as Bourbon's set was peppered with hits by the J. Geils Band and Jimi Hendrix. Two, the venue barred admittance to anyone under 21 years of age.

"The night turned out anything than what we had hoped," Sobel says. "Our friends were 17, 18, and they couldn't get in. And then there was the cover tunes ban - it was a drag. So we did what we could. We cut our setlist down and played to the club's staff and a couple of our friends' parents. It felt like there were more people on stage than in the audience. Not a lot of fun."

The truncated set required Bourbon Street to extend the intros and outros of their originals, and it offered Sobel his first big chance to play a drum solo in public. "The emergency drum solo!" he laughs. "Only back then, I wasn't as prepared as I am now, so I probably did something... a little mediocre. I was just trying to fill up the time, but the gig seemed as though it would never end."

Sobel sighs at the memory: "It was so important for us to play a kickass rock show. We had visions of a packed house with all of these chicks, and it wound up being more of a rehearsal." And then, chuckling, he says, "Every musician has to start somewhere. It's what Tommy [Henriksen] in the Alice band calls 'C.B.G.s' - Character Building Gigs. You get through it and chalk it up to experience."