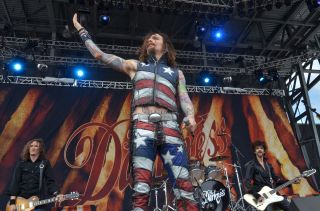 The Darkness at Rock on the Range festival (Image credit: Jason L Nelson/AdMedia/Corbis)

The Darkness have cancelled their planned Australian tour due to drummer Ed Graham's hip problems.

Graham has suffered with hip conditions for several years, a fact which led to his original exit from post Darkness band Stone Gods back in 2008.

A statement from The Darkness confirmed: "As some of you maybe aware, Ed has had some prior history with hip problems, which resulted in extensive surgery a few years ago, and caused him to miss some U.S. dates in 2012.  "Unfortunately, over the course of the past few weeks' touring, Ed has been feeling that all is not right in that department, and has been advised to undergo some rest and tests before potentially taking a backwards step and making matters worse.

"He will continue with the last few European shows and will then be forced to take some time out immediately to ensure him back to 100% fitness. This very sadly results in the immediate cancellation of the Antipodean tour."