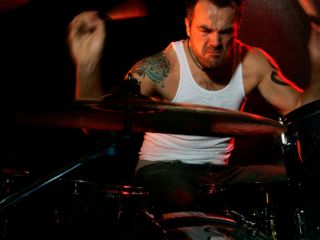 Mark Richardson is at Drummer Live

Richardson started out playing with Little Angels - who over 10 years toured with Guns N' Roses, Aerosmith and Van Halen - before joining Skunk Anansie. The band have recently reformed.

The Drummer Live lineup at LIMS is now:

Also confirmed at the show is a demonstration from The Clem Burke Drumming Project. This will be explaining the health, well-being and fitness benefits of drumming with guest drummer Darrin Mooney (Primal Scream) who will put himself through an incremental drumming test to exhaustion whilst wearing the latest 'state-of-the-art' sports science technology.

Mooney (pictured below) will battle to keep pace with the ultimate drum test.

MusicRadar is an official media partner of LIMS 2009.