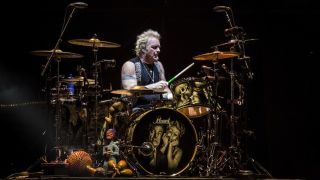 Joey Kramer looks back on the recording of Love in an Elevator, a smash hit from Aerosmith's second spell as the biggest rock band on the planet.

Where was the track recorded? Set the scene...

"That was [recorded] in Little Mountain in Vancouver, as were Permanent Vacation and Get A Grip. Little Mountain no longer exists, but that was Bruce Fairburn's favourite place to work - if you wanted to work with Bruce you had to go to Vancouver because that's where he lived and he wouldn't go anywhere else. I enjoyed working with Bruce because he's into drums and he's kind of a strange fellow, but we all got along real well. He collected bugs and butterflies and things like that. He was an odd duck."

How did you approach the track?

"Joe and Steve came up with the riff and then everybody had some rhythmic things going in there. It's difficult to answer those questions because we function as a band and I've learned over the years that it is important for me to listen to everyone, whether it's Brad or Tom or Joe. Having really good ideas comes from being able to listen to everybody else and see what their ideas are, because they're coming from a completely different place. That's always been important, it's part of being in a band. I think that it's a good song to exemplify what I really do, which, in my opinion, is lay down the groove in a heavy way: very simple, very hard and very groovacious. I think that's what that song is - it pretty much speaks for itself, especially to a drummer. It's a simple figure, until the middle part comes around where I double up on that bell, but it's all about the stuff that I do the best, which is keep a really simple, hard groove and keep it happening, keep the band fully alive and kicking."

"I thought, 'Hmm, pretty good'. By the time you hear it played back you've heard it so many times that it's really not taken on anything new. It's after you hear it the 10th or the 15th time on the radio that you start thinking, 'Wow, you know, that's not bad'."

What set-up were you using?

"I think it was an old set of Ludwigs. I didn't go with DW until the early '90s. In Little Mountain there was a big loading dock in the back of the studio and sometimes we'd put the drums in there for this huge sound; you could barely stand in there yourself with the drums. There were a lot of different tricks that Bruce used, and one of them was to use toms from one kit, a snare from another kit and a bass drum from another kit."