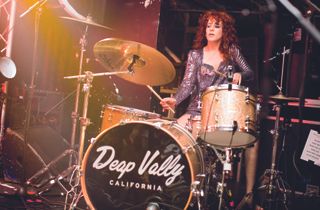 From many of us, drum heroes are people that we respect, drummers that inspire us to become better players.

For Julie Edwards, her first drum hero meant a whole lot more to her than that.

The Deap Vally drummer explains: "My dad was always a table-top drummer at dinner, my brother too and then I had this weird phase of my life where I became unhealthily obsessed with Keith Moon. I had never even thought about playing drums but I became obsessed with Keith Moon for a year and a half. I learned every detail about his life and I could only think in reference to him. I could literally not have a thought that wasn't about Keith Moon, everything related back to him.

"He was cute and he was tragic. I must have been in a place in my life where I really needed something to focus on. It could have been anything but it was Keith Moon."

Despite this obsession, Julie admits that her playing is a world away from that of her hero.

"I play kind of open like he did but I'm a very laid-back drummer and he was very frenetic and he could play faster fills than anyone before or since. For me, someone I hold in high esteem for his timekeeping, his creativity, his heaviness, his flourish is John Bonham. Bonham is everything. he wasn't about tightness at all - tight was not even a word - pocket, creativity, interpretation, telling a story, he was just such a creative drummer. yet, at the same time he had the most instinctive taste ever."