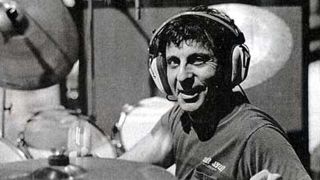 In the February 2014 issue of Rhythm, on sale now, our monster cover feature presents the stories behind 10 of the most iconic drum sounds ever recorded and we show how you can create them yourself, with audio and video examples, mixing techniques, miking ideas and more!

As part of the feature we spoke to some of the drummers, producers and engineers involved in the tracks to add their expert take on things. We got so much information we couldn't fit it all in the magazine, so here we present some bonus material - deleted scenes, if you will.

In this interview, Wrecking Crew drum legend Hal Blaine talks about working with eccentric producer Phil Spector on The Ronettes classic Be My Baby.

What do you remember of your times in the studio with Phil Spector?

"My memories of a Phil Spector session are just the greatest. Not hard, but it took a lot of stamina because Phil did not like to take breaks. So many producers are superstitious. He liked to use the same engineer (Barry Levine), the same set-up at the (now defunct) fabulous Goldstar Studio, the same microphones, the same chairs. He would only work Friday nights. He would always use the same people and he referred to us as 'the wall of sound.' Goldstar studio A was small. We did so many big hit records at that studio.

"Phil was one of the few guys that when we finished a song, after we were dismissed, he immediately started mixing with Brian Levine, who became Herb Alpert's head of sound at A&M Records."

How did the part come about?

"For some reason I really did not remember anything about a drum part that was written out. We may have been rehearsing with a straight backbeat on two and four the entire song. But, the red light goes on and I counted off and I dropped a stick on the floor! All of a sudden I'm not playing on the two. Playing the four with my good hand that's still working as I'm reaching for another drum stick out of my trap case! When you're in the studio, if you make a mistake, do it every four or eight bars, it becomes part of the arrangement. So, they seemed to love it and it worked great. Leave it the way it is. We did a number of takes with Phil; twenty-eight, twenty-nine, something like that. It was an amazing time."

Do you remember the kit you used?

"The kit I used was the Blue Sparkle Ludwig that happens to be at the Musician's Hall of Fame in Nashville, Tennessee. Those drums really worked for me."

"He (Phil Spector) loved my particular drum sound. My drum sound is midrange. That's the way I tune my snare drum, the toms, the bass. You've got four drums. You must think of it musically, piano, bass, soprano and tenor. Of those four drums I start with my snare. I bring it up to midrange. I go to a tom or two, a floor tom and a bass drum. We liked 'em flat and we liked taking the front head off [the bass drum]. It became a great sound for us."

Want your drum recordings to sound like Hal Blaine on Be My Baby? Find out more in the latest issue of Rhythm.