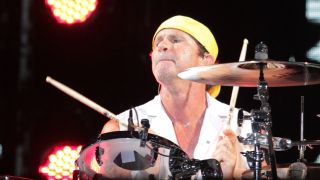 Looks like an epic clash of the titans drum-style is on: Actor Will Ferrell has accepted a challenge by Red Hot Chili Peppers sticksman Chad Smith to face off in a drum battle for charity.

It all began earlier this week when Ferrell, noting the doppelgänger-like similarity between him and Smith, said during a Reddit AMA session, "It has been acknowledged many times that myself and Chad Smith, drummer for the Red Hot Chili Peppers, share a resemblance to each other. A lot of people think that it's me playing for the Red Hot Chili Peppers. But that would be an insult to Chad Smith. The truth of the matter is there is no Will Ferrell. Only Chad Smith."

Ferrell followed this up with a video posted on Funny Or Die, saying, "It was great to finally clear up the fact that I am Chad Smith."

Smith was quick to respond, posting his own video on Funny Or Die and throwing down the gauntlet: "It's Chad... Stop impersonating me! Fact: I need you… drum battle, me and you. I've seen your skills. You don't got 'em. Let's go. Golden cowbell, winner - boom!"

In his own Reddit AMA, Smith had more to say about Ferrell: "His cowbell work is well-documented, but his drumset skills are nominal based on Step Brothers the film... Other than wiping his testicles on the drums, which of course I give high marks to.

"If he chooses to accept the drum battle…If I LOSE, I will work free of charge as his stand-in on his next film or wash his car for the duration of filming. But if I WIN, he has to give me free pedicures for a year. Gotta take care of your feet!"

Ferrell: "We can do it on stage at a Red Hot Chili Peppers concert or in front of a mutually convenient public library." © Brock Miller/Splash News/Corbis

Yesterday (January 7), Ferrell accepted Smith's challenge, signing back onto Reddit and writing, "Hi, Chad. Will Ferrell here. I saw your video and I graciously accept your invitation to a drum battle. If we can raise $300,000 for Cancer For College I will face off with you in the greatest drum vs. cowbell showdown the world has ever seen. We can do it on stage at a Red Hot Chili Peppers concert or in front of a mutually convenient public library. Your call. Also, would you rather fight a hundred duck sized ducks or one horse sized horse?"

Smith was quick to reply: "Hey Will, I've logged back in JUST to accept your challenge. Bring IT!"

MusicRadar will bring you more on this story as it develops. Donations to Cancer For College can be made here.