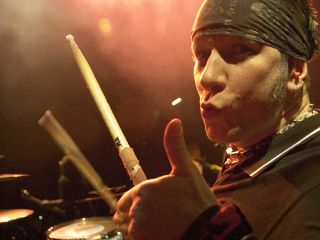 It's probably safe to assume that you've noticed those big colourful Music Live banners each side of the page by now? Yes, the excellent music-making event at Birmingham's NEC is edging nearer (6-8 November) and we've got the skinny on the big names who'll be gracing 2009's event with their talented presence…

Jason Bowld's new band, They Fell From The Sky (fronted by Hundred Reasons' Colin Doran) also make their live debut on the Friday night while the epic Titans Of Tribute show rounds off the weekend with a recreation of the classic Donington Monsters of Rock line-up from 1988… in tribute band form! Hulloween, UK Guns n'Roses, Megadeth UK, Yankee Rose, Dressed To Kill and Hi-On Maiden are set to raise the roof.

As if that wasn't enough, the Hellfire Festival will be storming the live stage every evening of the event with a varied line-up covering everything from Saxon, Fields Of The Nephilim and Anvil to Sylosis and Blakfish.

For more details and to book tickets, check out Music Live's official site.