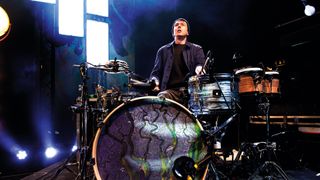 Few bands manage to be as unique-sounding as Alt-J. The Mercury prize-winning outfit are helped in this respect by the interesting rhythmic and gear choices of the man behind the kit, Thom Green.

His set-up is pretty unique, for starters. His drums are all set up horizontally, and he has no cymbals. As Thom explains to Rhythm, this lack of metals was originally a stylistic development born out of necessity.

"When I was growing up, I played cymbals, I was playing in metal bands. When I went to uni in Leeds, I started playing with these guys. We were playing in a bedroom, we had so little room that originally I had just a snare drum. Then I brought my bass drum from home. For a hi-hat I used a saucepan that I turned upside down and tied to my leg. The pan worked. It had the right sound and it's actually on the album."

As for the rest of the kit, Thom tells us, "I quite like it sounding like an electronic kit. The toms have Moongel on so they don't give off much reverb, they're very dead."

But while he might like his kit to sound electronic, he's not quite prepared to go the whole hog and actually play an e-kit.

"Roland were wondering if I wanted to use an electronic kit recently, but I don't know," he says. "I like the challenge and I like the fact that I've developed some kind of sound of my own. I don't want it to be too easy..."

Read the rest of Rhythm's interview with Thom in the May issue of Rhythm, out now!