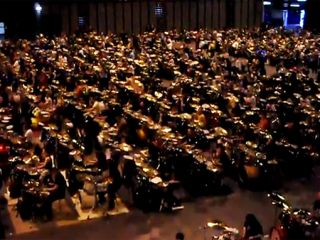 Yesterday, 13 July 2009, is a day that will go down in infamy. At least it will for the 582 drummers that took part in the Stick It To MS World Record attempt.

Following the success of the weekend's Guitarfest and Drumfest events, the Birmingham NIA played host to a World Record attempt for the most drummers playing the same beat at one time.

A total of 582 drummers made the attempt and, in doing so, raised money for the Multiple Slerosis Society - the event has so far raised £20,000 with that figure expected to rise considerably.

Organiser Craig Glover told Sky News: "It's been absolutely fantastic. Everyone has really enjoyed themselves - it was a really good atmosphere. We did a simple rock groove and played for at least 10 minutes. We have video evidence and certificates, which we will now send off to get verified by Guinness (World Records)."

The above video gives you a flavour of yesterday's drum action. WARNING: It's loud! Turn the volume down before clicking play. Seriously.