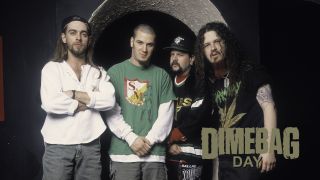 When Phil Anselmo joined Pantera for 1988’s Power Metal album, it saw the band take a new direction. Gone was the glam metal sound and styling, and here to stay was a more aggressive, groovy brand of heavy. Phil credits part of this to the band’s friendship with Slayer, and in this interview with Total Guitar from 2014, he reflects on joining the band, and what it was like crafting Dimebag’s riffs into full songs.

What were your first impressions of Dime’s playing?

“The first time I met Dimebag was when they flew me out to try out for the band. He was incredible. He was just as good, if not better, than anyone else that was supposedly big out there. He had elements of a lot of extremely popular guitar players at the time, but he also had this natural feel that you can’t learn out of a book or in a classroom. He had a natural vibrato to his playing. It was a feel thing. There was no secret he was an incredible player.”

Your arrival in the band saw a change in sound, how key was Dime in that switch?

“He was one of the first to perk up to the tapes that I was pushing on them. I would make mix tapes of all of the underground bands. He started to take note of certain nuances from that. A great turning point was when we all befriended Kerry King from Slayer. Kerry would come and stay at my apartment and watch us jam.

"This one time he called me up and said he wanted to jam with us. I said, ‘Hold the phone there Dr Evil, let me make sure it’s cool with the rest of the band.’ Kerry flew in a week early and we worked out some old Pantera songs, some Slayer songs and did a bunch of Judas Priest. I think within that time frame of Dimebag learning Raining Blood and all of these riffs, I think he discovered for himself the power within thrash riffing.”

How did you approach writing in Pantera?

“Dimebag always had something as far as parts or riffs. Sometimes, for me, it would be a complete turn-off, I’d be like, ‘That’s impossible, there’s no way we can use that,’ and then the circumstance would arise where it would be like, ‘I remember that riff you had one time that I hated, but you know what? It might work great here.’

"Writing was always a group effort. I guess everybody but Vince [Vinnie Paul] had written riffs for Pantera, but that is not wholly fair because a lot of our riffs were based around Vince’s drum playing as well. If you were looking at a percentage scale, Dimebag would of course have the most riffs written.”

So Dime wasn’t precious about riffs?

“He was very open. There were so many times where I felt terrible because I had to be the guy that had to say, ‘Dime, this is not going to work, buddy.’ In that situation it was always a never say never thing, though. If I ever got too ugly with my riff writing, or riff desires, he might look at me and laugh and say, ‘Fuck off, man!’ It didn’t get to that point too often.”

Was he inspirational to be around?

“He was masterful at seizing the moment. He was always enthusiastic to try anything and do everything. When you’ve got a guy like that across from you it challenges everybody’s talent level. That is something great within a band when you have three guys across from you that have a talent level that is through the roof. When it comes to a guitar player as great as Dimebag, he was a beast on the guitar.”

Did you play much guitar around Dime? Did you pick up many tips from him?

“No. The opening and main riffs to Mouth For War were my riffs. When I played them it sounded like a penny hitting the floor, when Dimebag grabbed the guitar and played the exact same riff it sounded like an elephant charging through the room.

He had this thing, I’ve even spoken to Zakk Wylde about this, he had this grip on the neck that, to me, is just unparalleled. He was a master of the god-damn fretboard. I would play the same amp, his guitar, the same riff and it did not have the power of when Dimebag would grab the same rig. He had a magical way about his playing that really brought riffs to a whole different level. It was incredible.”

Do you have a favourite Dimebag riff?

“That is almost unfair to ask. People may scoff and laugh at a record like Power Metal, but I dare them to learn the riff to the song Power Metal. Good luck with that and with your execution playing that.

Then you look at Cowboys From Hell with that breakdown part where he and Rex are doing runs together. Dimebag had a special way of making guitar licks into memorable riffs and parts.

As far as my favourites, oh god, it’s stuff like Slaughter, By Demons Be Driven, but then again later on there’s stuff like You Have To Belong To It and songs like that. Becoming, when he started incorporating his pedal work and started coming up with different textures and really hideous noises, I enjoyed that quite a bit.”

“I’ll say right off the bat the solo to The Sleep, that was an incredible solo. All that early stuff, Psycho Holiday had an incredibly bluesy feel that was beautiful. Domination had an incredible solo. I know that I’m picking early recorded stuff, these are the ones that jump out to me right now. I could go through the whole catalogue and pick out a million solos. Really it is an unfair question, you bastard!”

Walk is such an iconic riff, what do you remember about hearing that the first time?

“That song was almost laughable because it was so simple. I have never been in a band as talented as Pantera, or as tight. When everybody would lock down on the Walk riff, it was tremendous.

"That song, I think it struck all of us and maybe made us laugh behind our own backs a little bit because of its simplicity, but we also had respect for how powerful it was in that simplicity.”

Do you hear Dime’s influence in many modern players?

“In tone, for sure. As far as technique goes there might be a handful of guys, but I think what is missing is soul. That vibrato, that is usually a terminology for a vocalist, the same thing can be said for guitar, and he could make that damned guitar sing.

"It was his fret control. His left hand was better than his right hand, and his right hand was impeccable. That’s an incredible combination. I think Dimebag, still to this day, is in a league of his own.”

You’ve played Pantera songs recently with Zakk Wylde, is it emotional to play those songs without Dime?

“Any time I get up and play Pantera stuff with anybody, there is always a little extra spark. You can see the audience light up and you can feel it in the air. There’s something beyond the average atmosphere. It’s always special.”

What is your overriding memory of Dime?

“He was a champion of the good time. When everybody was exhausted in the middle of nowhere, he was always the guy that lifted those spirits. As risque as some of that may have been, it was all meant in great fun. That is something I can totally identify with and I miss that terribly, and I know the rest of us do.

"There are so many moving thoughts of what Dimebag brought to the table. He was a master of all ceremonies. An incredible person and an entertainer on all levels of life.”