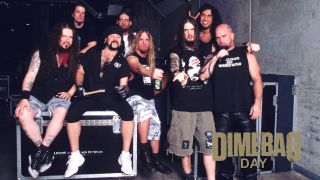 When KFK wasn’t busy redefining heavy metal in the 1980s, he also had a big influence on Pantera’s shift from glam-metal to the heavy brutality that made them legends. Kerry also formed a close friendship with Dimebag, and here he reflects on the axemen’s relationship.

At what point did you first become aware of Dimebag?

“Probably a lot sooner than most. It’s funny, I’ve just found a box full of pictures and there’s some in there from the time I went to Dallas and played with Pantera, this was from like 1989. We must have become friends a year or two before that.

"We were in Dallas with a day off and me and Tom [Araya] ended up at some club Pantera was playing at. Somehow they talked me into getting up there and playing Raining Blood with them, which is something I don’t do because I don’t know how other people play our songs. But I’d had enough to drink that night so I said, ‘Okay, I’m game.’

“We hit it off and I stayed in touch with him. I went to Dallas and hung with the guys. It was that show that I found pictures from, we did four Slayer songs, four Pantera songs and four Judas Priest songs. Me, Dime and Phil were tight before Pantera were even popular.”

“I think they were more Van Halen-ish [early on], you can see that in Dime’s style. Maybe when I went and played and we did hardcore Slayer stuff, maybe it opened their eyes to getting a little edgier. I even liked the album before Cowboys… [ Power Metal]. The album where Phil has LA-band hair!

There was something there, you could tell there was. When they did Cowboys... you could tell that they found what they were looking for. It was heavy and you had a technical dude behind it. It’s funny to think of Dime as technical but he absolutely was.”

Was it obvious from the off that Dime was something special?

“It didn’t take a genius to look at that guy and realise that he was as good as they come. He was a natural, but he put tonnes of time into it, way more time than I do.

"It’s hard to talk about, he was also the nicest guy on the planet. When I got word of… when he got, man, how do you say this nicely? When I found out he was no longer with us, I couldn’t believe it.”

“It was really cool being friends with him. All through the 90s until the last time we played with them in 2001 on their last US tour, it was common knowledge that every time they came through town I would jump on stage with them. I probably shared the stage with Dime and Pantera more than anybody.”

Do you hear Dime’s influence in modern metal?

“Without question. I can hear Pantera in a lot of bands from the last 15 years. It’s to the point where it’s like, ‘Really, you don’t think that sounds like Pantera?!’”

What is the classic Dimebag riff?

“Oh man, how much time have you got? There are so many. I like the end of Domination where he solos over it, but I can’t stop there, Becoming as well. When Becoming came out I hated it. I was so naïve that I assumed that the riff had a sample in it, I didn’t realise it was him on a pedal. When I realised it was Dime with his pedal that changed everything for me, that is such a monster riff.”

What is your favourite Dimebag solo?

“That is super difficult. I would go for either This Love or Cemetery Gates.”

How do you think Dime evolved as a guitarist through his career?

“As a fan I enjoyed what he did. I like all kinds of stuff, I like AC/DC because AC/DC sounds like AC/DC, I like Slayer because of the same fuckin’ thing, I don’t need a band to evolve, if a band has their own niche, which Pantera did, then I’m fine with them staying there. I think they hovered around that the whole time.

"There might have been a little bit of growing up and maturing, but they didn’t try to be something that they weren’t.”

“There were never any bad memories. It’s an odd thing, we helped each other. I believe it was Seasons In The Abyss for me and I was talking to Dime on the phone and telling him about my leads and saying I was 80 per cent done with them and I’d left a little bit for the traditional whammy thing that I rely on too often if I don’t make shit up before I get to it, and Dime just told me to just do what I do and do what people like about me as a player.