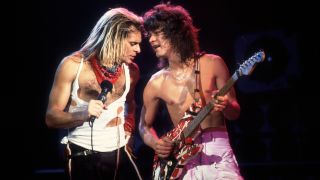 David Lee Roth is not a man we would associate with understatement, and his proclamations during interviews with the press are never less than entertaining – particularly on the subject of Van Halen. But his latest claim regarding his involvement with Eddie Van Halen's guitar solos on the band's debut album is particularly interesting.

In a recent interview with Missouri radio station KSHE 95 to discuss his upcoming Las Vegas residency, Roth was asked about performing Van Halen songs – specifically whether he sought permission from his current / former (nobody is sure) bandmates to perform songs from their back catalogue, and his response was bullish to say the least…

“No, because I wrote the songs. I wrote every word you heard, every syllable, every melody," Roth claimed. "I structured out, even the guitar solos on that first album.

“Why do you think the solos [later] changed so radically? I sang the solos for Jamie’s Cryin and Runnin With The Devil etc…"

But that wasn't all.

Even before that claim, Roth wasn't holding back in the interview from reminding us of his role in Van Halen when talking about Vegas residency plans with new backing band Horses Of God…

"Van Halen live is lead / bass / drums, here we start with three / four guitars, and we bring it with an unforgiving attitude. We're not up here strumming with the devil, this is not some tribute band. I wrote those songs, structured those songs.

"I designed the backgrounds on the stage. I came up with the album covers. I thought of the stripes on the guitar. I’m the one who said, ‘Call it Van Halen'. And we take it with that attitude. We ain't talking about love…"

You can hear the full interview below.