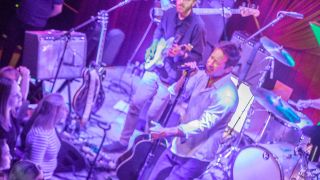 “My notoriety as an actor is my leg-up,” David Duchovny tells MusicRadar ahead of his far-reaching European tour. “I get to fill places that I wouldn’t be able to fill just because of my music.”

Duchovny’s feet are firmly planted on the ground when it comes to discussing the European run of dates which kicks off this week in Moscow and winds up on 22 February in London.

“I can take my music there and I am perfectly happy and a realist about how I can fill these places. I don’t care why people came to see me, it’s just great that they did even if it’s because they know me from this or that but now they can listen to the music.”

The thing is, while fans of Duchovny’s TV and movie work may part with their cash out of curiosity, the X-Files star has tunes to back up the chutzpah of a well-known face launching a music career in his 50s.

If Duchovny’s 2015 debut Hell or Highwater was the sound of a relatively inexperienced musician finding his feet, 2018’s Every Third Thought is a marked step up, filled with assured songwriting and his ever-increasing confidence as a musician and singer. Even better, it’s all rooted in the 58-year-old’s most treasured influences.

“I'm a British invasion guy,” he says. “When I was growing up it was all the Beatles, Stones, Who, Kinks, Elton John and then as I got a little older it was Allman Brothers, Sly and the Family Stone, Al Green, Stevie Wonder.”

As Duchovny (who is also an acclaimed author with three novels under his belt since 2015) prepared to head out to Moscow for that first show, we caught up with him to talk his unlikely solo career, the joy of his precious Martin and how he’s bravely battling against gear acquisition syndrome.

You came to guitar later on in life…

“That’s putting it kindly [laughs]. It was very late. I think I gave it a shot when I was about 10 for maybe a couple of lessons but unfortunately, to my eternal disappointment, I didn’t keep at it. Then when I was about 50, I just decided that I wasn’t going to go to my grave not knowing how to play an instrument.

"I love music and have a lot of downtime as an actor. You’re in your trailer a lot so I thought why couldn’t I be sat there just playing along to music? That was really the first step.

“From there, being half Scottish and half Jewish, I knew if I bought a $3,000 guitar I would be so disappointed in myself if I didn’t play it. I went and bought an expensive guitar and I knew I would play it because I’d spent money on it!”

What attracted you to that particular guitar?

“Oh god, this is so superficial. I liked the way it looked. I like the sound of Martins, they’re deeper, I mean I didn’t know any of this when I went to buy the guitar.

"I played a couple of the guitars that they had and I liked what they told me about the Martin, and that was that it’s not as bright as some of the others and it has this deep tone. I responded to that.

“I thought it was beautiful looking as well. I had a friend who is a great guitar player and he said, ‘That’s not superficial, if you’ve got a guitar that you think looks good, you’ll play better on it.’”

That guitar has clearly stayed with you – why is that?

“It’s the tone. It’s beautiful sounding guitar. There are plenty of great sounding guitars though. I think the neck is a little wider on my Martin. It’s great for picking, which I don’t really do that much of so that doesn’t help me, I’m just used to it. I’ve dinged it up and I know where the dings are. It looks nice and used now. I love that I have a history with this particular guitar.”

Have you become a gear collector at all?

“I haven’t, but I certainly could. We just went to buy my daughter a bass and we walked into the Guitar Center here and I was like, ‘Shit, I want them all.’ Guitars are just beautiful objects. I haven’t yet though. I’ve got a semi-acoustic Taylor and a Fender electric as well and that’s all I need.”

Are you drawn more towards the acoustics?

“Well, I don’t really play lead. I like strumming an electric. I like sometimes playing chord progressions I’m working with on the electric just to hear them that way. I like that the electric is a little more forgiving. I can be a little muddy and that’s ok on the electric. When you deaden the strings on the acoustic; nobody likes that.”

And you were self-taught?

“Yeah, I taught myself by just looking up songs on the internet. I got a chord book and looked up songs that I liked. If they were three or four chords then I would play those. Then I started looking for songs with chords that I wanted to learn. It’d be, ‘Man, I’ve got to find a song with a D7 in it.’”

Going back, it sounds like you picked up the guitar out of an ‘if I don’t do this now’ moment, rather than from a pre-planned thought of wanting to make a record

“Oh yeah. I’m not blessed with a singing voice that people are clamouring to hear. My whole life, people weren’t saying, ‘David, you must sing, you really must.’ There was never any reason for me to write a song or sing it to anybody, let alone then record it. It was all the furthest thing from my mind. I just wanted to play guitar for myself. Then when I started writing songs I just wanted to see if I could write songs and then I was surprised. I was just surprised that I was writing decent songs.”

How did that progress to making two albums and going on world tours?!

“Unfortunately, that progression has been the demise of my guitar playing. I would say four years ago I was the best guitar player that I have been. Then, as I started recording and I realised that I might perform live I realised I really had to work on my voice if I wanted to get the most out of that instrument.

"That’s the instrument that I have that is unique, my guitar playing is unique in a bad sense, but nobody really cares to hear my guitar playing. If I was going to go out live and sing these songs, I had to figure out my voice. I was lucky enough to find an amazing voice coach in New York. I’d say almost every day I spend at least half an hour doing vocal exercises. That has been the instrument I have worked on during the last four years and my guitar playing has suffered. Hey, I’m not saying I’m a great singer either, but for me it takes work to get to a point where I can be decent.”

How intimidating was it to put yourself out there as a musician? People love to shoot celebrity side projects down!

“That’s just human nature! Nobody wants to re-evaluate. It’s like, ‘I know that he was an actor, I don’t have the time or energy to re-evaluate this mother fucker! Why can’t he just do what he does and keep doing that?’ I knew there would be that.

"That can cut me but it doesn’t go deep because I know where it’s coming from. It’s coming from a pre-judgement. If someone really went into me and critiqued me, that might hurt. But if they just say about me being an actor-singer then I know where you’re coming from, a place of bullshit.”

Every Third Thought sounds like an album made by someone much more confident in their songwriting skin than Hell or Highwater - is that a fair judgement?

“Yeah, way more. I’ve done it twice now, I’ve written almost 40 songs and that’s a lot of songs. I guess I can say I’m a songwriter now! I can say that and not have to defend that.

"Hey, I might have to defend it to some people but I don’t have to defend it. I’ve done it 40 times and that’s a bit. I am more confident in my singing as well and I can stretch it out more in recording and in orchestration and arrangement.

"I write in a key and zone that is comfortable to me but as I have worked on my voice I have been pushed in other places.”

Does your process tend to involve you sat with the Martin that we mentioned earlier?

Looking ahead to the February tour, are there any stops that you’re particularly looking forward to?

For more information head to www.davidduchovnymusic.com