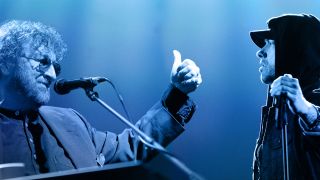 Chas Hodges and his longtime writing partner Dave Peacock are all over Eminem’s My Name Is, the first single taken from the Slim Shady LP. Yes, you read that right.

The surprising fact has come to light after the sad passing of Chas Hodges at the weekend. The London-born guitarist, pianist and singer was 74 and died peacefully soon after treatment for oesophageal cancer.

Hodges was one half of cockney rockers Chas and Dave. The pair, whose career spanned over 40 years, were avid Tottenham Hotspur fans, penning several official songs for the team. They also had several top ten hits, including Rabbit and Snooker Loopy, and a variety TV show in the early ‘80s called Chas and Dave's Knees Up.

However, it’s as session musicians earlier in their career that they planted the seed of unwitting hip-hop stardom. Both Hodges and Peacock featured on Labi Siffre’s 1975 single I Got The…, from the album Remember My Name. The track was then sampled for My Name Is by the production powerhouse that is Dr. Dre in 1999.

The NME reports that author Mark Mason mentions the bombshell in his 2009 book The Importance of Being Trivial, and goes on to explain: “The first [Chas] heard of his connection with rap royalty, he told me, was from his son. ‘He came into the room and said, “I can’t believe it - my dad’s on a worldwide hit!”‘ What about royalties? ‘We ain’t had any yet,’ said Chas, ‘but someone’s chasing it up. We’ve signed something, anyway.’”

A quick search on WhoSampled reveals that Eminem is not the only rapper to sample Siffre’s track, with the likes of Jay-Z, and Wu-Tang Clan members, Method Man and RZA also picking at the funk classic.