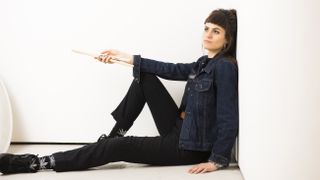 With a guitarist who loves country music, a bassist into hip-hop, and a metalhead behind the drums, Brutus inhabit some rowdy netherworld between hardcore punk, metal, and post-rock. Hailing from Ghent, Belgium, the band was born out of the friendship between drummer/vocalist Stefanie Mannaerts, guitarist Stijn Vanhoegaerden, and bass player Peter Mulders, although at the start they didn’t know what sort of noise they were going to make.

“Normally when you start a band, you want to have a post-rock band, or a metal band, or maybe we could be DJs,” says Mannaerts, “but with Brutus we knew we wanted to start a band. That was the only thing. We knew it was with guitar, bass, and drums, but there are so many options with those instruments.”

Nest, their second album, was recorded in Vancouver, Canada, continuing the trio’s collaboration with producer Jesse Gander from their 2017 debut Burst. Nowadays Mannaerts is comfortable with her dual role as drummer and lead singer, but when the group originally formed, they planned to find someone to be the vocalist. “After a few months the microphone was just standing there and Stijn was like, ‘You might as well try it,’” says Mannaerts. “I was thinking, I can do backing vocals with the singer we were looking for, but then they were like, ‘Actually it’s kind of cool just the three of us, maybe we should try this?’ I didn’t want to, but they gave me a lot of time and space to develop.”

You’re all from Ghent, how did you wind up recording two albums in Vancouver, Canada?

“We did around a hundred shows before Burst, the first album, so we had some money saved. We were like, maybe this is as big as it gets, we can just take our savings and ask a cool producer to record us. We can fly someone in and do the recordings in Belgium. But Belgium is kind of an expensive country when it comes to recordings and then we thought, just for fun, let’s check out how much it would cost if the three of us went to Jesse Gander, the producer. We just went for it. It was totally isolated. When you record in Belgium, people will visit you when you’re in the studio, you’ll get distracted.”

Did you talk to Jesse about how you wanted the drums to sound?

“We let him know, ‘We’re going to rent a drum kit like Stefanie’s kit, it’s very important to us and to her that she knows how to tune it, we know the sound.’ When we picked up the rented drum kit, it felt like home. It’s a good thing we didn’t use a studio drum kit because you can hear I’m used to playing on this kit. We rented the same drum kit I have at home [a Gretsch USA Custom]. He suggested, ‘I have this Ludwig kit that’s amazing, and I have this DW kit’, but I was like no. It’s already stressful to go to the other end of the world to record with another crazy person like us, not knowing what to expect, not knowing how the songs are going to sound. Let’s rent our own gear and then we’ll see about the rest.”

Were you still writing music in Canada and did you go there with finished songs?

“Finished songs. There are small things that will change like, maybe we should use Delay instead of Chorus for the guitars, or maybe we should do only one guitar here instead of doubling it up, or one vocal instead of a harmony. That’s stuff that changes in the studio but with the last album [Nest], we were very, very prepared so we already knew, this song, no click track; that song, no harmony. We were very focused this time. Also, it wasn’t like the first time we were in a new studio in another country with people speaking another language, wow, it was so exotic. Now it was like, we know where the good hot dog places are, everything was fine, let’s make the best record that we can make.”

How does the song-writing work in Brutus?

“It’s always different but mainly what I remember is that Stijn will make some rhythms at home, not specifically rock or hard rock, they can be country rhythms or just things that he likes, and we build from those. Maybe Peter has a bass sound, but it’s always the three of us together. It’s never, ‘I made a song, you should play this, and you should play that.’ That’s a solo project, not a band.”

Did you use a click on any tracks in the studio?

“Some yeah, if it’s necessary, but every recording we have less and less use of the click track. Maybe the next time we won’t use any click track. That would be perfect because you know when you’re in the pocket. Sometimes you’re not in the pocket even with a click track.”

Some bands run their entire shows to a click!

“Which I understand, it’s something to rely on, but the problem is I used to teach drumming and then you have kids who think they can only play good to a click track because they can literally hear if they’re in time. I used to play a lot with it and I got less steady because you’re relying on a thing that’s not even real. But if it works for you, it works for you.”

Do you still do any teaching?

“I don’t have the energy for it right now because you have like twenty students and five practice. You know how it is, it’s the same in every school. If they would promise me, ‘Here are the five students who will practice,’ I would do it, but it’s never like that and it’s just draining and annoying. I can’t be mad at kids, I just say, ‘Okay, you didn’t practice. Let’s practice here. See you in fifteen minutes, please don’t waste my time.’ They make more progress in those fifteen minutes than in the last four weeks.”

How do you maintain your energy levels onstage? It must be tough keeping that consistent intensity?

How do you unwind afterwards?

“I’m not going to tell you that. For ten minutes after the show I hate everyone and don’t want to talk to anyone and still some people manage to find me. I hate it so bad. It’s like show’s over, it was good, f*ck you all, see you in half an hour, and then I’m happy.”

Lars Ulrich is a fan of the band?

“He invited us to his show in Antwerp and we thought, ‘Yeah, we’re probably just going to watch the show in the corner of this gigantic venue.’ We got there, we had VIP tickets, there was food, there’s a Metallica Museum, apparently people pay for that, and we could do all those crazy things and then at one point it was like, ‘Yeah, you’re ready to meet Lars?’ ‘Uh, yes.’ He was super cool, super nice dude, totally not superficial. He was very interested, it looked like he’d prepared questions like an interview – how the band came together, what music were we listening to, what was it like in the studio? It was very cool. We gave him all the merch we had.”

How does Burst compare to Nest?

“With this album, we tried to get more of what I hear onstage or what I think people hear when they come to see a show. Burst is more of a studio album. It doesn’t sound live. There’s no flaws. We didn’t take out any mistakes in the new record to make it feel more live. There’s bleed through some mics, we didn’t care. We went for the best take, not the most flawless take. Listening to this record now, it’s already more like what I experience live and what I think I’m hearing. Burst is a good studio album, which is also nice.”

How does playing a festival compare to playing club shows?

“You have to work harder. Not if they’re already drunk, but we’ve had opening slots, evening slots. In some ways its harder because you want to create that magic that you have in a room with a hundred people, but there’s 7000. Sometimes you feel like it’s working and that’s a very warming feeling. It’s a different kind of focus. I have to work harder on a festival, there’s just so much more to prove. The sound is going everywhere, it doesn’t matter how good your sound guy is. When you’re in a club, you know it sounds tight and good and hard and loud. When you’re in a festival, there are so many factors to take into consideration. Sometimes they’re like, ‘This festival has a 98db limit,’ then you’re already stressing out - I can’t compensate with loudness if I’m not playing very well.”

What have been the highlights of life with Brutus so far?

“One co-headline show in our hometown of Ghent, in a very old ballroom, I think that was the best show I ever played. All the people I ever loved were there.”