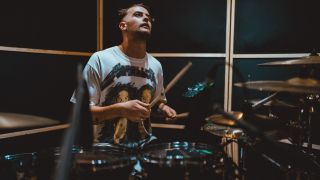 Every now and then, a player comes along who personifies what it means to be a drummer at that particular time in music - and right now it’s Eddy Thrower.

Eddy has created his very own approach to playing rock music and has become an in demand drummer far beyond the borders of his band, Lower Than Atlantis.

He has played, toured and recorded with One Direction, 5 Seconds of Summer, Blink 182, Linkin Park and A Day to Remember to name a few, is an accomplished drum tutor, and was voted number 3 best rock drummer in Rhythm Magazine’s 2017 polls.

Eddy will perform on the Main Stage at 3pm on Saturday 10th November in association with Tama and Zildjian.

Don’t miss his unmistakable chops and groove at LDS 2018.

For full details of the show, and tickets head over to londondrumshow.com now.