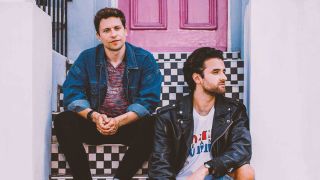 Blonde are Jacob Manson and Adam Englefield, a deep house duo, with several major hits to their name. All Cried Out, I Loved You and Craig David collaboration Nothing Like This were all A-listed by Radio 1, and they were also co-writers of Lay It All On Me, a collaboration between Rudimental and Ed Sheeran.

They recently returned with a new single, Me Myself and I, which features Bryn Christopher.

Enough about their own music, though: we wanted the Blonde boys to tell us about tracks by other people that have hit the spot for them. This being an equal partnership, they picked five each...

“I first heard this driving into Paris with Adam and the Eton Messy boys. We were going slow through traffic on a four-lane highway into the city and it felt so epic and cinematic.”

“I'll always remember hearing Bonobo play this live at the opening party for Dimensions in 2013. It was in an ancient Roman colosseum and he had an orchestra with him. Incredible.

“I still don't know how to pronounce this one but I saw Joy O (FKA Joy Orbison) drop it at Basement 45 in Bristol back in 2009 and it absolutely melted my brain.”

“I love the original song, but this Âme remix takes it to a completely different place. The three minutes of build up before the chord progression kicks in create so much tension, and when that descending bassline comes in it's such a beautiful moment.”

“A secret gem, this one. Not so much a dance song but a production masterclass, Sylas created something so futuristic and alien-sounding but still full of very human emotion. When that high vocal comes in it gives me goosebumps every time.”

“I heard this at an afterparty back in Bristol, 2010. I remember rushing over to the phone it was playing off to find out what it was. It set me on a new path on music exploration.”

“I had to have a Basement Jaxx track in this selection. It’s a hard decision singling just one out, but Fly Life Xtra just about came out on top. This track is nine minutes long and builds from start to finish. If you're ever lucky enough to hear this out in a club you won’t forget it.”

“His album In Colour is a masterpiece. Girl was the first track I heard off the record and it instantly resonated with me.”

“This has been a regular in the Blonde sets from day one. Whenever I play it and another DJ is nearby they'll always come and take a peep at the CDJ to see what it is!”

“If you ever need something funky to give your mood a lift this is the one. This whole album by Eli Escobar is definitely worth a listen, but Seein You is my jam.”