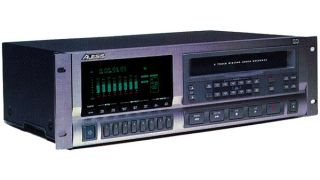 Almost as soon as the Alesis ADAT began shipping in 1992, it gained enormous popularity as the first affordable 8-track digital audio recorder. Thousands were sold before its eventual obsolescence.

For years, the promise of affordable, digital multitrack recording was just that: a promise. Everyone knew in the late '80s that digital would be the next big thing, but until Alesis shipped the Alesis Digital Audio Tape (ADAT) recorder in 1992, digital multitrackers were beyond the average musician's financial reach. If you wanted 24 tracks of digital, you would have to pay more than $60,000 for any of several systems guaranteed to become obsolete in the very near future.

When the ADAT appeared, the promise became a reality; $3,995 got you eight tracks of 16-bit, 48kHz recording on easy-to-find Super VHS (S-VHS) tape running at three times VHS'' normal speed. With the right skills, musicians everywhere could suddenly afford the kind of quality previously available only to pro recording studios. Soon, the terms project studio and digital audio workstation (DAW) became part of the recording lexicon.

At the speed of light pipe

It wasn't long before everyone from bedroom recordists to top-flight engineers adopted ADAT as a new standard. You could sync up to 16 machines (though not always as seamlessly as users would have liked), making massive track counts available for a fraction of what previous rigs cost. If other bandmembers had ADATs, you could link them together for additional tracks in multiples of eight. Unlike traditional tape machines, you didn''t need to replace your ADAT when you needed more tracks. Analog 8-track recorders all but disappeared, and it''s easy to understand why: Recording 40 minutes on S-VHS tape was considerably less expensive than recording 40 minutes on 10-inch reels of half-inch tape, and the ADAT''s sound quality and ease of use were arguably superior.

The original ADAT (later called the Blackface) was a solid rackmount unit with balanced and unbalanced analogue audio connections and a new digital, fibre-optic protocol called Lightpipe, which used inexpensive Toslink connectors. ADAT Lightpipe could dependably route eight tracks from one device to any other that supported the protocol over two impossibly thin cables, one for each direction. Shortly thereafter, Alesis licensed the ADAT recording format to Fostex, Panasonic, and Studer, which introduced their own ADAT recorders.

Alesis soon introduced the Big Remote Control, improving the user experience and giving ADAT recorders new synchronization and control capabilities. During the next six years, subsequent ADAT machines included the 16-bit XT and 20-bit XT20, LX20, and M20, which attempted to keep up with the increasing demands and cost-effectiveness of audio technology.

Inevitably, the advent of hard-disk recorders brought the age of tape-based DAWs to a close. As the cost of hard drives fell, computer-based DAWs became popular, offering random-access editing, highly visual GUIs, and easy integration with MIDI tracks. A few diehards claim that old ADAT machines in good working order are still a viable recording platform, but for the rest of us, the ADAT legacy lives on in the standardisation of the Lightpipe protocol.