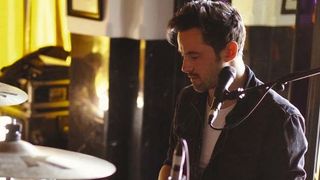 With heavyweight names such as Ed Sheeran on his CV, Brit drummer Mark Pusey has carved out quite the session niche for himself. As well as the ginger-haired chart-conqueror, Pusey has played with the likes of Tom Jones, Olly Murs and Leona Lewis.

Plus, if you’ve tuned into any of the mega Saturday night talent shows over the last few years, chances are that you’d have seen Mark behind the kit at some point. As a fine example of the modern session star, who better to tackle our batch of must-know questions?

What was your first kit?

“It was a Premier Beverley. It was in a spare room at home that my parents set up four days before my birthday and they locked the door to the room. I went in that room so infrequently that I had no idea it was in there.

“It never occurred to me to open that door and look in. They even sent me round to my friend’s house – his mum had just bought an aviary and I thought it was the most boring thing in the world as a 12-year-old kid: ‘Hey, come round and see my mum’s new aviary.’

“But they got me round there so my parents had enough time to set the kit up. I ended up trading it up about 18 months later for an APK, but that first kit was a Premier Beverley in white.”

“In those early days it was really anything I could get hold of. It was dictated by what my parents listened to. As a 12-year-old I would listen to whatever was around the house.

“When I got into music at school I had a friend who was into the Dave Matthews Band, so Carter Beauford was a big early influence. The older I got the more my musical tastes matured and it became Carlos Vega and Jeff Porcaro, they were the main two.”

“I had a teacher very early on. My parents were good enough to make sure I had decent tuition straight away. I had a teacher called Jim Ferris down in Devon.

“Then I started lessons with Bob Armstrong. Then, when I was old enough to pay for the train fare, I would travel from Devon to see Bob.

What is the one piece of gear you’ve got you couldn’t live without?

“I’ve got the Ludwig 400 snare drum that Carlos Vega used on the Grease soundtrack and ‘Wind Beneath My Wings’. He used it with James Taylor. He toured it with Olivia Newton John.

“When he died I was given that and a load of other gear. That 400 works on everything. You can put a coated Diplomat on it and it’s super-sensitive and it sounds beautiful.

“You can put a Powerstroke III on it and it sounds like a fat rock snare. It’s really versatile. I think it has some of his magic in it. To me, it’s like owning Hendrix’s guitar.”

If you could pick anyone at all, who would you most like to take a drum lesson from?

“Thanks to the internet, today it’s like you can contact and take a lesson with anyone in the world. I’d like to hang for a day with Jim Keltner.

“I’d love to spend a day with him and watch him doing what he does in the studio. I think what he has is innate. Maybe Vinnie as well, but I’m not sure what he could show me that I’d get conceptually!”

“Versatility. I have always wanted to work and I’ve always just been into music. It has always seemed like good sense to me to be able to play everything pretty well.

“If someone calls me up asking me to do a Latin gig, if you can’t play Latin and don’t have a decent grasp of it then you’ve just lost yourself a gig and a week’s rent or whatever.

“Obviously, my strengths lie in different areas and no one is going to ring me up to do a metal tour, but I know enough about different genres that I could do a decent impression of it.”

“Focused, repetitive practice. I lack the discipline to go into a room and shed like I used to as a kid because we’re in the real world, working, paying mortgages and all of that stuff.”

What’s the key to playing a big TV gig?

“Proper preparedness prevents piss-poor performance. If you’re super-prepared and know what you’re doing and you’re good, and if you’re playing those TV shows then you are probably the right person for the job.

“It’s just a matter of rising to the occasion. If you’re properly prepared then the only pressure of those gigs is the pressure you put on yourself.

“It’s about having more skills than you need for the job so that you’re only running at 50 percent of your capacity.”

What is your proudest moment?

“Getting a gig with Tom Jones. I loved phoning my mum and dad and telling them.

“That was the first act that I worked with that my parents were like, ‘What, we know who that is, what are you doing with him?’ And I was like, ‘Play drums, that’s my job!’”

“There was a song called ‘Turtle Power’ from the Teenage Mutant Ninja Turtles movie and my brother had that on a cassette. I would play along to that.

“An 11-year-old doesn’t have the resources to go buy the latest Miles Davis album so it was that or maybe something from The Simpsons album!”

“It depends on the type of music, on how hard I’m hitting, on the gig. I use mostly coated heads in the studio. But, occasionally, if I need more attack I use a thinner head that’s not coated so you get that initial stick definition.

“It’s rare that you need that in the studio though because people are after warmth, rather than attack and full of clarity.” 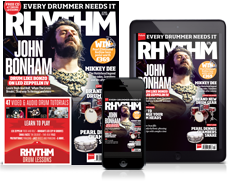