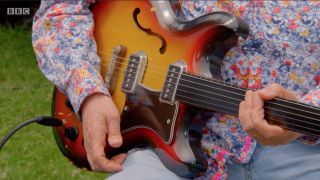 A guitar that once belonged to the Beatles' John Lennon and George Harrison has been valued at £400,000 (approx $511,000) by an expert on the BBC television programme the Antiques Roadshow.

The long-running television series finds sees members of the public bring in items to be valued by its team of antiques experts.

In the latest episode filmed at historic Battle Abbey in Sussex, a very rare fretless guitar made by Californian company Bartell was brought in by its current owner, a session musician called Ray.

Ray recorded sessions for a film company that was co-founded by George Harrison, and the late Beatle had asked him to play the guitar.

"I played a few notes," explained Ray, "and he said: 'Yeah, you're definitely getting more out of it than I am. It's doing better for you, why don't you have it'."

During the episode the guitar's vital provenance is proved with a photograph showing Harrison in his house with his guitar collection, including the Bartell prototype.

In the episode it is claimed Bartell's owner gave one to John Lennon and one to Jimi Hendrix. Presumably, Lennon passed his to Harrison.

"To a guitar collector, it's initially a very rare guitar," he added.

"Then to somebody who's a Beatles fan, to own a guitar that was once owned by both John Lennon and George Harrison, can you get a better history? Two of the most important rock stars of the 20th Century."

Ray himself was 'taken aback' by the news;  "I never really thought about value, as George being a mate and all that.

"I didn't realise it was worth that much money. It's lucky I don't keep it in the house."

Ray didn't reveal what he intends to do with the guitar now though.