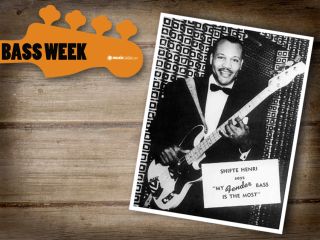 Immortalised in the Jailhouse Rock lyrics, Shifty Henry was an early adopter of the Fender Precision Bass

BASS EXPO 2014: The early days of bass playing must have been a nightmare! Low resonance plus the need for audible volume meant huge instruments like the Mandobass (mandolin style) and the Regal Bassoguitar, which was a monster cross between an acoustic guitar and an upright bass.

The Dobro Resonator Bass was a little smaller in comparison thankfully but still unwieldy so it's no wonder that the upright bass as we know it remained a constant favourite for the first half of the twentieth century.

The bass revolution really started with the introduction of electronics and amplification and for the earliest examples we have to look at the Vega Electric Bass Viol from the 1930s, the Electrified Double Bass from Regal in 1936 and Rickenbacker with their Electro Bass-Viol from around the same time.

These were essentially the centre part of an upright bass from headstock to end pin so no prizes for guessing where the designs for the skeletal electric uprights of the 1990s came from!

Each came with an amplifier but the Rickenbacker was curious as along with featuring their classic styled horseshoe magnetic pickup the endpin included a jack plug and the whole thing slotted into the top of the amp so no leads were needed.

Gibson took things a step forward with their Electric Bass Guitar in 1938 which was still an upright instrument with a hollow body in spite of the encouraging name.

It stood about five feet tall and was indeed like an archtop bass guitar with a proper looking magnetic pickup and two controls but it still used an endpin. In fact Wally Kamin used one of these during his time as the bass player in the Les Paul Trio, but very few were actually made.

The true birth of the bass guitar and bass playing as we know it today really started in the 1950s with the birth of the Precision Bass in late 1951. Leo Fender always had an affinity towards bass players who were finding it harder to be heard within the band or ensembles of which they were a part.

Hauling a double bass around was a pain to say the least so Leo's Fender Precision Bass was nothing short of manna from heaven for the players of the time. There had been attempts before but Leo's instrument was the one that defined a look, a scale length and a practicality hitherto unknown.

Leo was a fan of country music and hoped the bass would be as well received in that genre as the Esquire/Telecaster were proving to be and indeed the first Precision Bass that arrived in Nashville was snapped up by Joel Price who began using it at the Grand Ole Opry in 1952.

But somewhat surprisingly it was the jazz area that really took the instrument under its wing. In order to promote his invention Leo would call in at concerts and nightclubs to show off his instruments and in New York he encountered Lionel Hampton's band.

Not, it's not a vacuum cleaner, it's the Rickenbacker Electro Bass-Viol

Bassist Roy Johnson tried the Precision and Lionel loved the sound. Leo told them to keep it and the Bassman amplifier as it would be good publicity for Fender. When Roy left to be replaced by Monk Montgomery (brother of guitarist Wes), Monk was asked to play the Precision.

As a well respected upright player Monk was horrified but Hampton was insistent as the bigger bass sound had become a trademark of the band.

Conventional bass players recognised it as a threat and it was referred to as 'the bastard instrument' but Monk got to grips with it and was soon making a name for himself.

The musical wheels were in motion however and the bastard was not about to go away. Another early endorsee was Shifty Henry, a jump jazz player with Louis Jordan & His Tympany Five.

Perhaps his biggest claim to fame is being featured in a line of Elvis Presley's Jailhouse Rock - "Shifty Henry said to Bugs for heaven's sake" - and for this track Presley's bass player Bill Black also took to the Precision and rock 'n' roll had gained a new voice.

But Fender didn't have it all their own way. Ricky Nelson was on his way up and even Elvis saw him as a potential threat. Ricky's bass player used an upright to record with but on the road he used a Rickenbacker, although that's another story...