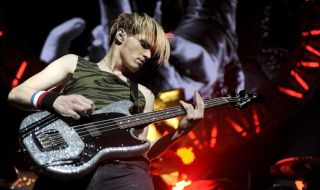 BASS EXPO 2013: My Chemical Romance are a band that have polarised opinions, angered newspapers, formed an army of extremely loyal fans the world over and managed to keep their heads in the process. But despite their formidable live reputation, their musicianship is often overlooked in favour of whatever controversy the press has decided to attribute to the band that month.

In attempt to rectify this, we spoke to bassist Mikey Way and picked his brains about his early influences, his gear preferences and the development of his signature Squier Mustang bass.

Enter our competition to win a Mikey Way Mustang Bass

What's your very first memory of the bass guitar?

"My very first memory of the bass guitar - I was about three years old and heard Another One Bites The Dust by Queen on the radio. It was burned into my skull from that moment on, and became a benchmark for bass lines in my mind."

"My first breakthrough with bass playing was during one of the first MCR practices in December of 2001. Gerard [Way, frontman] and Ray Toro [lead guitar] both coached me, as I hadn't had a great deal of bass experience up to that point. When I got the picking pattern/timing for [early MCR track] Our Lady of Sorrows down, I had a total 'wow' moment and knew not only did I love it, but I would play the bass forever."

What, for you, is the key to be being a good bass player?

"In my opinion, the key to being a good bass player is rhythm and timing. Bass is what the drummer plays from mostly and everybody goes off the drummers beat."

My Chemical Romance - Planetary (Go!), the song that Mikey says he finds the most challenging

What MCR song has presented the biggest challenge for you as a bass player and why?

"I would say the song that presented the biggest challenge for me was Planetary (Go!) [from MCR's fourth album Danger Days: The True Lives of the Fabulous Killjoys]. That song takes a great deal of dexterity to play live, and in turn has made me a better player."

MCR has, for better or worse, had a variety of drummers in its 10 year + history. What impact has that had on your role in the band's rhythm section?

"I can honestly say it benefited me greatly. I've played with five drummers in MCR, either onstage or in the studio and jammed with countless others. They each had different styles and nuances, so I was able to learn a lot from each of them."

Gerard has spoken before about 'Bowie moments' - the 'pinch yourself' experiences the band occasionally gets to enjoy. What have been your favourite Bowie moments with MCR?

"I have been very fortunate to have had many of those moments in our career thus far. Some highlight 'Bowie/pinch me moments' being -the reveal of The Black Parade in London back in '06, headlining Reading and Leeds in 2012, being the first American band in 30 something years to play Vietnam, and being the last band to play in Time Square before the ball dropped."

Have you ever met any of your bass playing heroes? Who's inspiring you currently?

"I've been able to meet many of my bass heroes through the years luckily! Matt Sharp's bass playing on the first two Weezer albums never fails to inspire me."

Do you have a favourite bass line of all time? What is it and why?

"Oh wow, this is a toughie! It's so hard to pick just one, but any of Louis Johnson's bass lines on Michael Jackson's Thriller album take the cake. They are still stuck in my head to this day, after hearing them almost 30 years ago. They are powerful and infectious."

What do you look for when you're buying a bass?

"When I'm buying a bass I look for equal parts sound, playability and vibe. Not only do I want it to sound and play amazing, but its an added bonus when it has interesting "battle damage" or an interesting color pattern that I've never seen before."

You recently released a signature Squier Mustang bass. How did that come about? How does it feel to have your name on a guitar?

"Before, we were discussing 'pinch yourself' moments, and getting my own signature Squier Mustang bass is on that list. I had been sponsored by Fender through most of my time in MCR. I had contacted them about making a custom bass and they hit me back saying they wanted to give me a signature model! To me, this is one of my greatest accomplishments.

"I started playing electric guitar at 14/15, and it was a Fender Stratocaster. My first bass was a Squier P Bass and I haven't used anything but Fender onstage ever since. To say its a tremendous honour and privilege would be an understatement. At least once a day I think about it, and it makes me smile ear to ear."

What is it about the Mustang bass that draws you to that model? What features were you keen to incorporate?

I was drawn to the Mustang because, simply put, they are a hell of a lot of fun to play - especially in a live setting [and] I've always really wanted a Mustang, with a humbucker, and a competition stripe (it's classic and classy!). I've always been in love with flake/sparkle finishes as well; so if you stir all of that up in one - you have my signature model."

What other bass gear do you use? (Amps, pedals etc.) And why?

"As far as other bass equipment - I use the Fender Super Bass Man. From the minute I took it out of the box I was in love, and won't use anything else. Not only does it sound HUGE, but the range of sounds and tones you can get is uncanny. Highly recommended.

"As far as pedals go, I always love the Memory Man and Bass Big Muff/regular Big Muff from Electro-Harmonix. I've been using a Big Muff for distortion since I started playing the electric guitar and swear by it."

Do you use your signature bass on stage?

"Yes, I absolutely do. It's my weapon of choice, badge of honor, and good luck charm all rolled into one."

Enter our competition to win a Mikey Way Mustang Bass