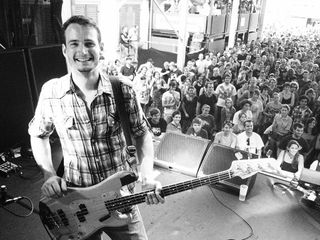 BASS EXPO 2014: As bassist for The Sleeping Souls (backing band to Frank Turner), Tarrant Anderson is no stranger to laying down some righteous bass lines. Befitting a band who regularly buck trends themselves, here Anderson chats about five very different bass players who all have one thing in common: they threw the rule book out of the window.

"Any 'top five' list of musicians is going to cause arguments because it's such a subjective undertaking," Anderson says. "So, with the caveat that I'm right and if you disagree with me you are wrong, here are my top five players who bucked bass playing conventions and broke the rules..."

"McCartney was a member of a moderately successful pop act called The Beatles. Yes, ok, so he's half of the greatest songwriting team who ever lived. But he's less commonly lauded for his bass playing abilities and this is a mistake. Up until the early 60s, most bass playing was used in jazz or in rock 'n' roll. The latter was played either on upright basses or early Fender electric basses.

"The technique and style was pretty basic, usually borrowing its form from horn lines. McCartney changed this. He played more expressively and melodically than previous bass players, often in the higher registers, treating his bass more like a lead guitar. His playing brought the bass to the forefront of rock 'n' roll songwriting, and it's difficult to overstate his influence on subsequent generations of bass players. Much as The Beatles defined how we still understand pop music, McCartney helped define how we now understand bass playing."

Want to hear a great slice of McCartney's bass playing in action? Anderson recommends Taxman from The Beatles album Revolver.

"The enigmatic bass player of The Who, Entwistle will now forever be linked with his untimely Las Vegas hotel room death accompanied by a stripper and a pile of cocaine. Like McCartney, he used the bass as a lead instrument, bucking the common practice of the bass providing the low-end rhythmical underpinning in rock arrangements. Unlike McCartney, though, he was a super technical player who innovated a unique playing style variously incorporating fingers, plectrum, tapping, and the use of harmonics.

"Entwistle played lightning fast melodic licks with an aggressive lead sound (he was one of the earliest exponents of bi-amping). and both his sound and style have inspired bassists for over four decades."

To hear one of Entwistle's most exciting bass moments, Anderson recommends My Generation from The Who album My Generation.

"Nicholls is the least well-known player on this list but he's probably my favourite. A stylistic disciple of Entwistle, Nicholls also employed an aggressive bi-amped lead sound with the same disdain for a root restricted rhythmical role. Though he's since moved on to play for Muse and Gorillaz, and has acted as Lilly Allen's musical director, it was as a member of The Senseless Things in the late 80s and early 90s when he truly shined, combining Entwistle style technique with a fantastic grasp of melody. He was also one of the first and only bass players to incorporate slap into rock in an acceptable way."

For a taster of Nicholls' bass playing, Anderson recommends Easy To Smile, or anything off The Senseless Things album The First of Too Many.

"Talking of slap, no list of bass players who broke the rules would be complete without Les Claypool. Famously turned down for Metallica in the early 80s for being 'too good', Claypool formed Primus and developed a technique that mixed slap, finger tapping, and flamenco style strumming to astonishing effect. Even those who find slap bass nauseating can't help but appreciate this most innovative of bass playing machines."

Tommy The Cat from the Primus album Sailing The Seas of Cheese is Anderson's choice for a prime example of Claypool's prodigious bass playing.

"Sandman has become synonymous with his end - he died on stage of a massive heart attack at the age of 46. But he was also one of the most skilled and underrated bass players of recent times. He used a two string slide bass tuned to a fifth to create a deep, fluid, laid back style. Together with his bandmates in Morphine, they combined elements of blues and jazz with traditional rock arrangements to achieve a unique effect they coined 'low rock'. I discovered Morphine in the late 90s. After weeks of failing to figure out how Sandman got his sound, I emailed him to ask. Much to my surprise, I got a swift reply with detailed instructions."

New to Sandman's playing? Anderson recommends starting with Thursday from the Morphine album A Cure For Pain.