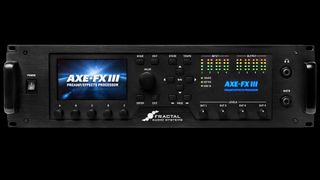 Since the original Axe-Fx's 2006 launch, Fractal Audio System's amp and fx-loaded guitar preamp family has garnered plaudits from, and been deployed by, such respected names as Steve Vai, John Petrucci, Jeff Loomis and Periphery's Misha Mansoor.

If Fractal is to be believed - and it's never let us down before - "If you can dream it, the Axe-Fx III can do it."

Speaker cabs? Just a few
Let's start with the speaker cabs on offer, shall we? Axe-FX III allows you to choose from an astonishing 2,200+, including all the Axe-Fx II's, in a legacy bank, plus  'factory impulse responses' (IRs) from producers and artists, including Fractal Audio, AustinBuddy, Celestion, ML Sound Lab, Ownhammer, John Petrucci, Chris Traynor & James Santiago, Valhalla, York Audio, Dr. Bonkers, and more.

There are also a further 2,048 slots for 3rd party IRs or your own “User Cab” memories, enabled by a built-in utility allows you to capture and save your own speaker tones.

It has the power
And this thing is super-powerful. Two 1.0 GHz, floating-point “Keystone” Digital Signal Processors (DSPs) comprise the main audio engine. These processors are the most powerful DSPs available, delivering over twice the performance of the none-too-sluggish DSPs used in Axe-FX II.

Ultimately, this means you have almost limitless options when mangling the newly expanded routing grid of six rows and 14 columns. Essentially this means you can put up to six effects in parallel, and create four separate and independent effects chains at the same time.

We don't have a confirmed release date or price at time of writing, but Axe-FX II's RRP is $1799, to give you a rough idea of what to expect. We'll let you know as soon as we have definite info for III.

In the meantime, for much more detailed info on this beast of a processor, head over to Fractal's site.