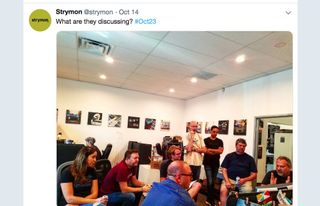 It's always a big event when Californian guitar effects designer Strymon break cover with a new pedal. And it looks like it's got a new product ready to be announced soon. But what?

The company's Instagram and Twitter accounts aren't saying what. But they do confirm a date along with a cryptic pic of the Strymon team in a meeting, including co-founder Pete Celi.

Whatever the product is that's following up this year's highly-rated Volante Magnetic Echo Machine to vie for space on your pedalboard, all will be revealed on Wednesday 23 October.

We'll have the full details for you as soon as they break.