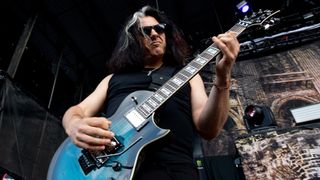 Few metal guitarists possess a genre-busting command of their instrument to the extent of Alex Skolnick.

The Berkeley-born musician rose to fame in the mid-'80s as the lead axeman in thrash juggernaut Testament, whose early output took the groundwork laid by the likes of Metallica and Slayer to new extremes.

In the years since, he’s also been releasing and performing music with the Alex Skolnick Trio – taking his learned musicianship into more fusion jazz-led environments that couldn’t be further from the mountain-conquering heaviness of his so-called day job.

In 2015 he joined up with Megadeth bassist David Ellefson, drum virtuoso Mike Portnoy and Mark Menghi to create the foundation for Metal Allegiance – inviting highly esteemed guests to sing or perform with them on certain tracks. This year, sees the release of their second full-length album Volume II - Power Drunk Majesty.

Like its predecessor, it features yet another all-star cast of characters guesting on each track, including the likes of shred hero Joe Satriani, Alice Cooper guitarist Nita Strauss, as well as The Black Dahlia Murder singer Trevor Strnad, Overkill’s Bobby Blitz and Accept frontman Mark Tornillo amongst others.

Here, Skolnick talks us through the story behind one of the most ambitious supergroups in the history of heavy metal...

Take us back to the roots of the project... how did it all start?

“This began with Mark Menghi, he’s like the visionary, and then David Ellefson signing up. My first involvement came a bit later during one of the last Motörhead ‘Motörboat’ cruises in 2014. It was more like a vehicle for clinics and joint workshops from an all-star cast of characters, eventually becoming a jam session at various events like cruises and the NAMM show.

“They called me aside and said they were looking to write an album of original material, with ideas from all of us on each instrument. So that first record had myself on guitar, Mike Portnoy on the drums plus David Ellefson and Mark Menghi on bass. I agreed to give it a shot and it ended up being a really fun project. I do a lot of music outside of metal and my main band, usually with musicians who wouldn’t know their Slayer from their Soundgarden.

“So this was a chance to do metal outside of my one main band that everyone knows me for, plus I also got to be the main riff guy. In Testament, I am more of a soloist and Eric [Peterson] plays the James Hetfield role. It was a great experience; we went a little crazy because we had so much freedom. There ended up being over two dozen guests on there after the writing core.

“This time we wanted to streamline things a bit, making music with more of a unified sound. There’s less personnel, but still plenty of great guest artists. It all reflects our natural development.”

“That was incredible. Him and I had recently connected at his G4 Guitar Camp, so I got to be one of the main teachers along with Eric Johnson, Mike Keneally and Steve Vai! It was great to see him after all these years, so we reached to him about playing on the record. You half-expect people to say no because they’re too busy, but Joe had the free time and was very much into the idea. It certainly made me step up… he’s the biggest inspiration for so many of us. Being on a track with him made it feel very real - time to up the game!

“Trading solos with him was quite an experience. I was very grateful that he played his part first, so I knew what I was going to be bouncing off from. When you play with someone like that, you don’t want to sound like you’re trying to sound too much like him; you want to sound like yourself. But I still wanted to react to what he was doing and I’m very glad with how it all came out.”

Along with Satch, you also have Nita Strauss from Alice Cooper’s band guesting on King With A Paper Crown, representing the new breed of guitar talent…

“She is definitely somebody new, who clearly grew up listening to Joe. She would have been too young to study with him like I did, but she has that new-generation quality and a great combination of technical ability, feel and emotion. It really fit perfectly into that song and having her really balanced things out – someone younger and upcoming against a towering guitar giant like Joe.

“Nita is famous for playing with Alice, who is associated with metal, though is actually quite diverse in musical qualities. Joe is more instrumental rock and probably appeals to people that aren’t metalheads, but anybody that plays metal guitar has probably listened to Satch and Alice Cooper.”

There’s a song with Overkill’s Bobby Blitz going into one with Mark Tornillo from Accept – both of whom embody the fun side of the old school wave of metal...

“I think Overkill and Accept – the senior class like, if you will – are still doing great things today. Plus that vocal style is very tough and brutal on the voice… I don’t know how they do it. There are very well-known cases of rock singers who have blown out their voices, but Bobby and Mark are examples of guys that still have it. Ronnie James Dio was like that too; same goes for Alice Cooper, if you see him now you don’t feel like you missed out and should have been there in the '70s. Maybe it was more debaucherous back then, but he sounds as good as ever!”

Personally speaking, what are your favourite solos on the record?

“We actually planned on having more guest soloists, but it didn’t quite work out schedule-wise. So there are moments where I ended up being both of the guitar players that were supposed to be trading off.

“I think it worked the best on Terminal Illusion where I went for a bluesy classic Strat sound, more of a Blackmore style, against a full Les Paul straightforward kinda tone – taking influence from Gary Moore who was pure tone and fingers.

“I’m definitely more of a double-humbucker guy, but it was good to try and do both. [Nightwish singer] Floor Jansen’s vocals are one of my favourite parts on the record; I love how her bits goes into Joe’s solo, then mine and finally back to her. It’s a great sequence of events!

“King With A Paper Crown, sung by [Amon Amarth’s] Johan Hegg is the one where I traded off with Nita, and because I had done so many solos across the record, I wanted a different sound. I’m not known as a big wah player, but allowed myself to indulge on that one with a Dunlop 535Q, which allows you to tweak and adjust how much it opens and closes.

“Mother Of Sin, with Bobby Blitz, has some trading with [Sepultura guitarist] Andreas Kisser… he’s phenomenal and I can’t give him enough credit. He’s a guitarist that really has his own song and I knew he would do the thrash solos justice. I went for this slow '70s Sabbath or UFO kinda rhythm underneath.”

What was your main rig for the recordings?

“I mostly used my signature ESP guitars – one in a Lemon Burst which had a great tone for these songs, so it was used for most of the rhythms. Then I went to my Silverburst to give different flavours whenever there were layers of guitar… I like the sound of different instruments.

“I’ve never been a huge whammy bar guy, but again I allowed myself to indulge after decades without using it, so got out my Aqua Burst ESP, and you can hear it on King With A Paper Crown.

“I’m very partial to this distortion pedal made by JAM called the TubeDreamer 88, based on the Tube Screamer, which works really well. There’s also a Phase 90 on Bound By Silence with John Bush, again as an attempt to sound like two different players!”

Tell us more about working with Mike Portnoy – what do you think makes him different to every other drummer you’ve played with?

“Mike is very diverse as a listener. He’s one of the biggest fans of music in general – anyone that follows him on social media can tell that. He loves The Beatles, KISS, Genesis... all manner of eras of different music. We were able to experiment with a lot of ideas and really open things up, like on the breakdown of King With A Paper Crown.

“He also moves really fast, haha! There’s not a lot of time wasted with Mike Portnoy, which I think is good. I moved to the East Coast because I like the pace of things better. Writing with him, you are in a big city studio and on the clock!

“I’ve always appreciated the Images And Words era of Dream Theater. I remember hearing their early demos – a couple of those guys came to see Testament before any of the records came out. I remember thinking, ‘Wow!’ I was quite new on the scene at the time and really valued people that could play clean and tastefully.

“It kinda bothered me that a lot of the glam bands had great guitarists – Dokken, Ratt, Winger and more – but I wanted to bring that level of guitar playing into thrash metal without the hairspray and spandex. So when they turned up with their demo, it excited me. Even though it wasn’t thrash, suddenly I didn’t feel alone and it felt like there were other bands that could really play!”

Finally, are there any tips you have for MusicRadar readers that are hoping to get closer to your style on this particular album?

“Off the top of my head, I’ve become less afraid of using influences from other styles of music. Right now, I’m enjoying using my fingers a lot! The solo in Terminal Illusion has quite a bit of that, especially on the more Strat-sounding solo… sometimes I wonder if it’s more of a British thing.

“Jeff Beck, for example, abandoned the pick entirely. Mark Knopfler on Sultans Of Swing, which is a song I think everyone needs to learn. Then there’s David Gilmour, and even some of the Blackmore stuff has fingers instead of picks. I’m not saying get rid of your pick – just be aware there’s so much you can do with your fingers.

“I even used this approach on a recent Testament song called Stronghold, and doubt I could get that sound without combining fingers and pick. That said, I can’t even imagine doing riffs without my pick… so don’t ditch it completely, haha!”