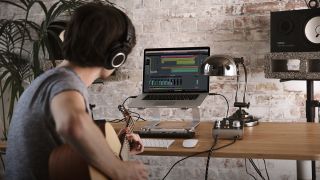 Before you start placing microphones, it’s important to note that your recording will be affected by the shape and sound of the room so choosing the right spot is really important.

Acoustics is a science of its own but a good rule of thumb to note is often a room with a lot of hard surfaces (a bathroom or church) will have a lot of reflections and will give you a more roomy and characterful sound that can be great but can also be difficult to control.

However, recording in a room with lots of furniture (a bedroom) will give you a tighter sounding recording due to the furniture absorbing the sound created from the guitar.

The most valuable tool you have here is your ears so a good place to start is by simply listening to the guitarist play in your chosen room, finding the best sounding spot and setting up your guitarist and mics there.

2. Knowing your microphones - condenser vs dynamic

Before you set up you need to select which microphones you are going to use. As acoustic guitars are delicate instruments and often contain a lot of high frequency information, the most common choice is a combination of condenser microphones. However there are no rules to which microphones you use and experimenting is all part of being an engineer.

Let’s take a look at some common techniques for both mono and stereo.

Here are some of the best positions that we found whilst experimenting with mic placements:

Placing the mic 6 - 12 inches away from the 12th - 14th fret often sounds like the most natural and balanced sound. Experiment with pointing the microphone more towards the neck for a thinner sound and more towards the sound hole for the sounds of the pick or fingers.

Recording the body of the guitar is going to yield a more mid and bass heavy tone than the previous technique. This technique can often complement a vocal track where the singer has a higher register voice.

When using a spaced pair technique, phasing will be more of an issue than coincidental pairs. To make sure phasing doesn’t ruin your mix make sure to use the 3:1 technique: “The distance between each microphone should be at least 3 times the distance the microphone is to the guitar.”

Start by placing one microphone around the 12th/14th fret and the other at the bridge pointing either at the body or towards the sound hole, 6 - 12 inches away. Adjust each mic so that they sound good on their own. When mixing the guitar sound, often each mic will be panned hard left and hard right.

Another popular technique is X/Y.  For this technique you’re going to want to place each microphone with their diaphragms as close as possible, to avoid any phasing. Each microphone should be 90º to each other. We recommend placing the mics around where the neck meets the body of the guitar. One of these mics will pick up the top end of the neck and the other will pick up the warmth of the body. In the mixing process you wouldn't pan these as extremely as the spaced pair.

Recording using the D.I. input is great for laying down tracks quickly and is often where a lot of songwriters will start when writing a song. However, as you’ll only be recording the sound of the acoustic guitar through the guitar’s pickup, you’re most likely going to end up with a slightly unnatural sounding guitar recording. As we’ve mentioned before, it’s the sound of the room that gives the guitar it’s natural feel and familiar sound, so Convolution reverb is your friend.

Put simply, convolution reverb is made from firing a series of frequencies into a room, recording them and then squashing them down into an impulse response. This gives you an accurate recreation of the rooms acoustics, which you can then apply to your recordings. Space Designer in Logic X or Space in Pro Tools are both great convolution reverbs and making use of them will make your D.I’d recordings sound a lot more natural.

It’s all well and good having your microphones set up perfectly, but you need a decent audio interface to capture the performance. You should consider the quality of the mic preamps and converters, ensuring you don’t have unwanted colouration or added noise, along with the interface’s usability, so you aren’t fighting to get a recording down and potentially missing the perfect take.

We recently voted Audient’s iD4 the best budget audio interface in our Best Audio Interfaces of 2018 article. It has one of Audient’s console mic preamps, along with a JFET instrument D.I input, and is the best USB audio interface we’ve seen at the price for a long time. For more inputs you can go for the larger iD14 or iD44, still making use of their console preamp and high quality converters.

The last thing you need to remember when recording acoustic guitar is to always try new things. There are no hard and fast rules so experiment and find out what works best for you!