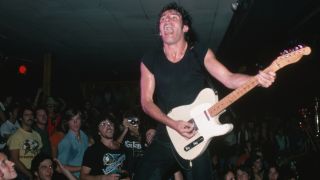 Bruce Springsteen’s near-unparalleled success as a songwriter and frontman has meant his considerable six-string abilities are often overlooked. While this is very much a “tiny violin” scenario, it is something of a shame, given that Springsteen has some not-inconsiderable chops.

His lead work was honed in the late-60s electric heyday, with his power trio Earth and hard rock band Steel Mill. However, as he details in his autobiography Born To Run, the songwriter elected to tone down the lead breaks as the guitar hero era broke and he pulled together his new group, the Bruce Springsteen Band.

Fortunately, for those on the look-out, there are numerous examples of fretboard flair dotted throughout the Boss’ back catalogue. Here we’ve combed the studio albums, plus fan-favourite bootlegs and live performances to bring you five of the best.

1. Kitty's Back (The Wild, The Innocent And The E-Street Shuffle)

Taken from what is perhaps the most under-appreciated of Springsteen’s studio records. The bridge between his youthful, but flawed 1973 debut Greetings From Asbury Park and breakthrough record Born To Run, it’s a brilliant, melodic melee.

Kitty’s Back is the six-string highlight: a weird, sleazy blues number that stands apart in its louche pacing, jerking jazz brass and scything lead bends – including an extensive midpoint solo. While you’re on the record, though, be sure to also check out the frenetically funky opener, The E-Street Shuffle (our favourite).

Not only does it feature some of Bruce’s cleanest lead work, it’s also an amazing showcase of swinging, in-the-pocket rhythm playing.  Finally, it all gives way to one of rock music’s most incredible false-finishes, with a frantic, percussion-laden brass workout.

1978 seems to be the magic year when it comes to Bruce’s lead playing. Perhaps it’s because, at this point, he’d convinced longterm collaborator and rhythm guitarist Steven Van Zandt (AKA Little Steven) to commit to the E-Street band, meaning the band leader could allow himself a little more leash, particularly in live settings.

Among all Bruce’s studio recordings, then, it is ’78’s Darkness On The Edge Of Town that seems to contain the largest concentration of The Boss’ finest fretwork. Streets Of Fire is like a beast awoken from a slumber – a masterclass in building a song – it grows from dull opening murmur, to burning passion in the space of minutes.

By the two minute mark, Bruce is left gasping huge lungfuls of air as he bellows the chorus vocal, before breaking into his most hair-raising studio solo. It is musical and mature, yet, like a lot of Springsteens’ early output, still vicious and melancholic.

The Candy’s Room solo – can be found elsewhere on the same album. A sort of distorted, tortured torrent, it feels more off-the-cuff, as if Bruce is wringing it in drops from the neck his Tele. It stakes a claim as the nearest rival to the Streets Of Fire solo in Bruce’s studio playing.

Continuing the 1978 love-in, is this version of Prove It All Night, a bootleg from Bruce and the band’s show at San Francisco’s Winterland Ballroom, in December of that year.

The song was originally released on Darkness On The Edge Of Town and that four-minute studio recording – the best starting point if you’re unfamiliar with the track – features a poignant, piercing solo. This colossal 13-minute live version – hailed as the ultimate by Boss freaks – brings to life the live metaphor of the title.

There’s a lengthy lead workout before the vocal even hits and you can really feel how Springsteen is pulling and shaping the band, as he improvises his way into the verse via a surprisingly thrilling five minutes of guitar-mauling and distortion.

What starts as a seemingly straight-down-the-line, clean interpretation is repeatedly pulled monstrously out of shape and reassembled. It’s a master magician’s trick, he pulls something from nothing on a mere whim, and whips the audience into a frenzy in the process.

The cast-off that became a hit, Springsteen wrote the music to Because The Night around the time he recorded Darkness On The Edge Of Town, but lost interest in the song. It was another love song and at that time he was focussing increasingly on the tales of economic depression and blue collar imprisonment that would become his signature.

Fortunately, Jimmy Iovine took Because The Night to Patti Smith, who added her own lyrics and made the song a hit. Springsteen seems to have heard it with fresh ears at this point and took to performing the song live regularly.

There’s a good version on the excellent Bruce Springsteen & The E Street Band Live 1975-85 compilation, recorded at Nassau Coliseum in 1980. It captures Bruce and the group in their hungry ascendance to megastardom off the back of The River.

There’s a winding, spontaneous outro solo from Bruce that ebbs and flows in and out of galloping pedal tones and bends as the band hammers in behind him. These days, Nils Lofgren takes a mean run at this solo live.

Like Dylan before him, Springsteen is not averse to rewriting and reconstructing his music in new forms, depending on the musicians he’s working with. Hence the folk-tinged work with the Seeger session band on 2007’s Live In Dublin, which retooled Atlantic City and Blinded By The Light as New Orleans carnival jams. Or, in the case of 2001’s Live In New York City, rebooting the brooding Youngstown with a glittering full-band overhaul.

We have to shine a light on a bandmate of the Boss here because the solo here is something very special. And after all, Springsteen described the prodigiously-talented Nils Lofgren as “the most over-qualified second guitarist in show business” when he inducted the E Street Band into the Rock ’N’ Roll Hall Of Fame.

In this 2000 performance, Lofgren proves the worth of that statement and more, levelling the Madison Square Garden audience with a run that is one of the most deftly constructed, astonishing and thrilling lead showcases of the E Street Band’s storied career.