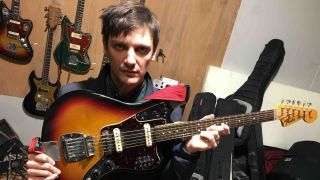 The guitarist even went as far as creating a limited-edition tremolo pedal, named after the group’s latest record.

“I wanted to make a tremolo pedal to come out with the Exit Index because, almost randomly, there is a lot of tremolo used on it,” he recalls.

“I've barely used tremolo before but came across an old Fender Princeton amp with tremolo, given to me for free, and decided to record most of the guitars with it.”

“I decided to try and make something that involves tremolo but really pushes it in weird ways. I like weird, noisy, idiosyncratic effects, so I decided to use the noisiness of that Fender amp and give it more violence, almost like a Leslie, with lots of aggression and thump that can, but doesn't have to, mangle the signal. It can make really angelic, pretty sounds and alien, harsh ones too. I hope people have fun with it.”

Sounds good to us. We quizzed Travis on his playing background and why he wishes he could just stick to one tuning…

“Jaguar. Sounds the best, takes a beating. Currently tuned something I can't remember.”

“It's boring, but the Boss TU-2, just because of all the tunings I play in. I couldn't really play live without it. Less boring: Boss PS-3 [Digital Pitch Shifter/Delay] - Death by Audio stuff doesn't count because I'm biased.”

“Moog Murf. I feel like I'll get another at some point, though.”

“Probably a major 7th. It's the ‘yearning’ chord.”

7. Is there an effect you’d like to create that doesn’t exist yet?

“Some modulation ideas that I'd love to work on when I get the time. There's definitely still a lot of room there for new stuff.”

“I never took any lessons, so I don't know that I'd want to start now, but I guess... Annie Clark of St. Vincent. She does a lot I wish I could do without being flashy.”

“I fainted once, while singing. Crashed into the mic stand. And my mom was there.”

“Stop playing in those stupid tunings.”

Exit Music is out now via Western Vinyl.