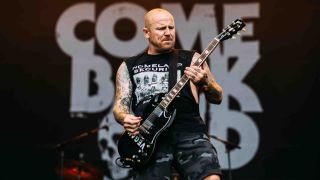 Guitarist and founding member Jeremy Hiebert continues to be at the forefront of the group’s uncompromising sonic onslaught, his trusty Mesa/Boogie Triple Rectifier running hot with super-tight palm-muting and razor-sharp powerchords, honed over 15 years of hard graft.

Before the band heads out on a UK tour with Every Time I Die, Knocked Loose and Higher Power, we caught up with Jeremy to get his thoughts on the gear he can’t live without and why he wishes he’d worked harder on those pesky scales…

“I know it was an Ibanez, but I can’t remember the model. I believe I got it about 25 years ago when I was 15 or 16. Unfortunately, about 15 years ago it was stolen.

“When I was younger my dad always told me that if I'd save up to buy something useful, he’d pay for half of it. So if I remember correctly, the guitar was a little over $500, so I saved up my money and my dad ponied up the rest.

“I can't think of any super-fond memories with it as I had it before I was playing shows, but I do remember the frustrations of having a whammy bar without the Floyd Rose locking nut or anything like that and always being out-of-tune.

“The guitar got stolen along with whatever else we had in our jam space at the time, including my precious first Triple Rectifier.”

“Most definitely my 1976 Les Paul Custom. A few years ago I was regularly attending a monthly vegan meet-up in my home city in Winnipeg and happened to start chatting with this guy who was a professor who had just moved to the city for work.

“We were both just talking about our guitars and I mentioned that I wanted to get a black Les Paul Custom that was built the year I was born. He excitedly told me he had one and that he would sell it to me for a great price. I couldn’t say no to that, and even though I don’t play it live because of the weight, I have used that guitar for over 90 per cent of my tracks on the last two records we recorded.”

“I don't know if it's considered an effect but my noise suppressor. I don't really use a lot of effects, but that thing helps me keep my gain up without emitting ear-damaging feedback every time I stop.”

“I'm a bit of a hoarder when it comes to my gear so, so far, I haven't sold anything I regret yet. I have had gear stolen, which has really bummed me out, though, and would love my first Mesa Triple Rectifier back. I think that gear was stolen in 2000 or 2001.

“I just remember our other guitarist went down to the jam space and the door was busted open and most of the gear was gone. I'm sure it was just time and place, but I feel there was something in that Rectifier tone-wise that I just haven't been able to pull off out of either of my other ones.

“As far as gear hoarding, it's not so much that I have a ton of gear, but more that whatever pedals or rack gear I bought and never used, I mostly still have, unfortunately. Do I really need a 31-band EQ for my guitar? 20 years ago, I thought I did. I mostly just have a bunch of Boss pedals and guitars that I don't really need to have around as they aren't being used. Maybe I just keep them to see if my son shows an interest in music?”

“Hmm, good question. I guess it really depends what style or guitar I'm playing. I do really enjoy minor 7ths, though, as they can have that beautiful longing type of feel at the right times.”

“I wish I could solo. It's just never come to me naturally, and I can get a little jealous of naturally gifted shredders. I have this dream of working on this to at least get the basics down but now that I have a child, it seems there’s no time to make myself a better guitarist. Just lucky to maintain what I've got with some practice.”

“Dimebag. Such a strong player. I remember first hearing Far Beyond Driven in 1994 when it came out. It just sounded so heavy, and even now listening back to that record, especially the first four songs off it, it’s still a monster.

“I never got to see them live, but I think with him, it just seemed like he had this way of putting so much personality and attitude into his playing that I just want to watch him up-close and connect with his instrument. Sure, I can learn how to play all of the notes he plays, but I just want that legend's lesson in how to play like he does.”

“I guess my laptop, assuming I had power. I like to be able to record my ideas and build on them. If there was no power, obviously I'd like to bring along an acoustic guitar as I will always feel the need to play a little here or there regardless of where I am at in life.”

“Fortunately, it hasn't happened for quite a while now, but falling on stage. I'm relatively active moving and jumping around, and sometimes I’ve become too carried away for my own two feet.

“There was this time that we did this tour in Australia a few years back and we had this Australian tour manager that I had a bit of a crush on, though I don't think I let on enough that she knew. We were playing in Perth, and I just remember kind of jumping backwards, rolling my foot on a cable and losing my balance going backwards with my head hitting my cab.

“I was super-embarrassed since she was standing on the side a few feet from me, but I had to get up and carry on like nothing happened with a sheepish embarrassed grin on my face. Very funny now.”

“Practise scales more. As boring as that seemed, it would have helped, but I was starting out playing guitar in the early ’90s when solos were quite frowned upon in many circles, compared with the ’70s and ’80s and then the 2000s. Even though we’re not a band that lends itself well to guitar solos, I just feel it would have helped make me a better player overall.”

Comeback Kid’s new record, Outsider, is out now via Nuclear Blast, and available from Amazon. The band tour the UK in November with Every Time I Die, Knocked Loose and Higher Power: