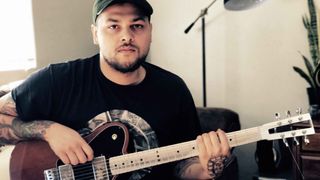 In recent years, the alt-rock revolution of the ’90s is once more becoming a fashionable reference point for up-and-comers, but few of these bands sound as raw and vital as their sonic touchstones; Sargent House signing Blis. are the exception.

The Atlanta, Georgia three-piece fuse the wiry guitar hooks that made Pixies a household name with the disarmingly candid songwriting nous wielded by the likes of Manchester Orchestra, making them likely contenders as the next big name in guitar-led catharsis.

Given the strength of their breathtakingly fully formed debut, No One Loves You, we felt compelled to get hold of lead songwriter, singer and guitarist, Aaron Gossett, to hear the unfortunate fate of his first guitar, the electrics that got away and a ripping - quite literally - onstage yarn…

“The first guitar I owned was a Walmart brand acoustic that my Dad bought me when I was eight or nine. He got so sick of me sneaking into his room to steal his guitar that he finally went out and got me one of my own. Funny thing is when I was 13 I had a Kurt Cobain moment and smashed it to pieces in my driveway with some friends. Needless to say, he wasn't very happy about that.”

“This one’s pretty easy. I have a ’72 Deluxe Reissue Tele that I bought an Electrical Guitar Company aluminium bolt-on neck for. That thing is pretty heavy, though, so I'd probably die in the fire trying to get it out. Plays like a dream, though.”

“Definitely either my Electro-Harmonix Freeze or Holy Grail Reverb. Both of those are really essential to the songs.”

“I used to have a barnwood Telecaster with a single coil in the bridge and an old ’60s Harmony guitar pickup in the neck. The tones I got off of that thing were amazing and it was light as a feather. That's probably one of the biggest regrets I have in selling a piece of gear. I'm still trying to convince the guy I sold it to to give it back, haha!”

“I want to learn how to solo. Not just like diddle around in a blues scale, but really fucking shred. Maybe one day.”

“A loop pedal and my Tele. I think with that combo I would never run out of options.”

“One time I was walking up to the stage and I tried to jump up from the front of it instead of going around the back and using the stairs. My pants ripped in the ass and it was pretty embarrassing.”

Blis.’s debut album, No One Loves You, is out now via Sargent House.