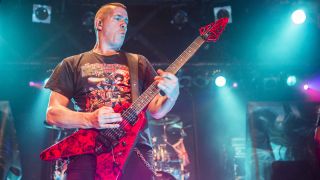 16 albums in, Annihilator remain a potent force in thrash and the wider world of metal, serving as Canada’s under-the-radar heavy heroes.

New record, For The Demented, finds guitar-toting frontman Jeff Waters in a contemplative mood, analysing the band’s late-'80s blend of speed and melody to rekindle the fire of their early output.

Accordingly, it seems like a good time to catch the guitarist’s thoughts on gear, technique and what caused him to fire his guitar tech...

“An old folk guitar - I was seven (it was 1973); my first electric guitar was from Sears department store around 1979: a cheap Les Paul copy and I striped it, just like my hero Eddie VH!”

“Eddie Van Halen Frankenstrat, and in the other hand, Gibson SG Diablo.”

“[MXR] EVH Phase 90 - that’s the secret lead guitar weapon I have used since 2005. It's tuned so perfectly to the frequencies around the picking sound. If you play sloppy, it’s not for you; if you play clean, it brings out your picking like no other pedal or effect.”

“Everything. I pretty much have not actually practised guitar since 1989... when our first CD was recorded. At that point, I had been shredding for almost 10 years non-stop, maybe eight hours a day, and did my time in hell. I reached a point where it was time to record and get out there touring, then soon after, time to spend free time on business and writing and life.

“I could be better at all aspects, but I like to enjoy life outside my room, too... I get a lot of inspiration from touring with great bands and playing live!”

“EVH, because he is/was/may always be the best combination of rhythm guitar playing, lead guitar playing and songwriting in history. There are many great players living and passed, but no-one had that high a level of all three of those guitar-playing qualities.”

“Wouldn’t that already be in the ‘building’s burning down’ answer? Haha! I’d take one of those guitars I’d mentioned, but also a pack of strings!”

“Alcatraz Festival in Belgium, a few summers ago. We were ready to rock such a killer fest, and my tech screwed up my tuner so that my guitars were tuned to a different tuning than the band. I played the whole first song and a bit of the next, knowing something was terribly wrong, but I couldn’t hear it. When I did, I panicked because my guitars were locked to the wrong tuning, but i still had no idea that I was out, and what was actually wrong, just that when i played, it was totally out with the other guys.

“Instead of simply calming down, I panicked and didn’t even think to grab my other guitarist’s guitar or tell the audience to wait five minutes until we sorted it out... I just stormed off the stage and threw my tuner pedal at our backdrop on the way off! Haha! It wasn’t funny then... the crowd, band and stage crew had no idea what I was doing and why I left.

“In hindsight, I should have either explained that we had technical difficulties, tried to solve them and, if not, apologise and call it a day... Instead, I pulled my first ’rock star temper tantrum’... but I also got a new tech after that!”

“Just to stretch more, be healthier, don’t use a computer mouse too much, sit up straighter, haha! Other than that, I think I managed to squeak through these four decades having a helluva lot of fun and making some cool music!”

For The Demented is out on 3 November via Neverland Music/Silver Lining Music.