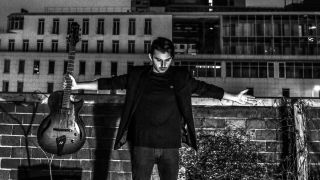 At just 20 years old, Slovakian-born, Irish-raised jazz guitarist Andreas Varady has had an enviable career to date - with just a little help from mentor, manager, producer and friend, Quincy Jones.

Varady’s third album, The Quest, showcases a player with technical wisdom and note choice far beyond his years - there’s not a run out of place throughout the record’s all-encompassing 10 tracks.

We caught up with the guitarist to hear about his essential gear, awkward onstage moments and why he wouldn’t change a thing about his journey so far…

“The first guitar I ever had was a very small Spanish guitar. I’m not sure about the brand or type, but that’s what I started on. Later on, I got a Richwood electric guitar when we moved to Ireland with the family - maybe that would be considered as my proper first guitar that I bought with my parents. It was a full electric Les Paul-type guitar in Sunburst colour - I played so much on that guitar. There are videos of me playing it as a kid on YouTube!”

“I used to have a bunch of guitars, but recently the size of the collection has shrunk down, so I would definitely grab my latest signature Benedetto! Thankfully, my first model with Benedetto is in one of my good friend’s music shop on display. But if I had to then I’d probably just take the two and risk it all!”

“I would say either the Strymon El Capistan or the Strymon BlueSky are the ones I could not go without on a gig or recording! I have a small pedalboard, but you always see those two there. Most of the sound comes out of your touch and way of playing, and your hands, but those pedals give it that extra touch for me. They both are just exactly what I like. Real and natural-sounding pedals that I use subtly to compliment my natural sound.”

“I wish I never sold my 1960s Fender Stratocaster. That was so nice! I loved it, but I unfortunately never really used it much as far as gigs and recording since the Benedetto fits my sound and vibe more. But yeah, that was a killer guitar! Also, I had an EHX Micro Pog that I sold once and now I would love to have one again.”

“Next on my ‘gear to get’ list would be the Strymon Riverside or some sort of a light distortion pedal and the Micro POG would be awesome to have! The EHX Freeze looks cool, or the TC Electronic Sub ’N’ Up is interesting to me as well! Other than that, I’m always on the search for something cool or something that could work with my sound.”

“I have too many favourite chords! Funny thing is, I don’t even know the names of the more complex ones, but the Lydian mode is an interesting sound! Sometimes I try to mimic how a piano can make chords sound fat and full.”

“I love George Benson’s tone from his early days, and Peter Bernstein’s as well. It sounds so natural and swinging. But I also really like Kurt Rosenwinkel’s sound!”

“I would love to have had a lesson from Allan Holdsworth. He inspired my guitar playing a lot and I feel like he knew everything about the guitar! It would have been amazing to learn some of his ideas and hear his take on different lines and chords. I would have loved to speak with him about composing and his guitar sound.”

“When I was around 13, two strings somehow broke in the middle of a solo. My dad quickly changed them - the fastest string change ever! Another time, in front of 5,000 people, I forgot to turn my volume up and we started a tune, and then I also accidentally stepped on my cable! I do the whole ‘tie the cable around the strap’ thing now!

“I wouldn’t tell my younger self anything, actually. That would change the person and the player I am today, and I believe that things happen the way they do for the better in the long run or for something else to happen in the future. Other than that, maybe I would just suggest experimenting with pedals sooner.”

The Quest is out now via Resonance Records.