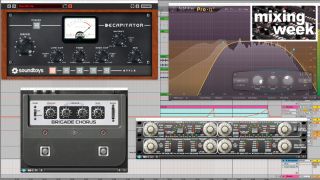 MIXING WEEK: Although sound design, sample selection, composition and arrangement all form the artistic content and structure of your music, it’s the way these parts come together and interact that will ultimately defines your own unique production aesthetic. The all-important final stage of mixing multiple tracks together into one cohesive whole is your chance to put a distinctive sonic stamp on the end product.

At the beginning of your journey as an artist, the goal is to simply mix tracks to a competent standard. With time, though, by equally dividing your focus between targeted learning and practical application, you pick up the necessary mixing chops required to balance a mix to an acceptable level.

Once you’re comfortable with basic mixing, and you understand the lofty levels your mixes need to reach to be successful, it’s time to decide exactly what your chosen sonic aesthetic will be. Here, we'll walk through the process of mixing a track in order to imprint it with a particular sound and style.

Step 1: Here’s a head-nodding 124bpm tech-house groove comprising basic beats (a 4/4 kick, clap, shakers, and a hat loop) alongside a repetitive chord hook and grooving bass loop. The rough mix sounds pretty good, but let’s alter the track’s overall tone using a few basic mixing techniques. We group a few of the parts to group busses: namely the kick and clap; shakers and hats; and the bass and chords.

Step 2: First, we’ll address the shaker and hat group. Listen to the track from the previous step; the hi-hat parts are something of a relentless ‘wash’, and therefore lack groove and movement. To remedy this, we’re using Xfer’s LFOTool to slowly fade up the group’s volume every half bar. To compensate for the slight drop in level, we then use Live’s Utility plugin to push the volume back up by around 1dB.

Step 3: The kick and clap are decent, but they could do with more character in the top-end. With this in mind, FabFilter’s Saturn multiband distortion plugin is loaded on the kick/clap buss. We distort the upper-mid and treble of this signal to extremes, then dial back the Mix knob to just 10%, which adds a vibey sense of bite and presence. A slight low-pass filter after the distortion then reins in extreme treble.

Step 4: Now for the bass and chords group. Experimentation is key for a distinctive-sounding result. Eventide’s Omnipressor is used in expansion mode to heavily pull up the quieter sections and introduce distortion over certain bass notes. We then use Live’s Audio Effect Rack feature to blend the processed signal in parallel alongside the dry signal.

Step 5: The chord line could do with more character and thickness in the mix. We use Soundtoys Crystallizer to mix in a subtle delay layer an octave above the chord’s root pitch. This addition is kept subtle in the mix, but we automate Crystallizer’s Dry/Wet Mix knob slightly up at the end of each four-bar section to give the effect motion and life, in line with the original part’s movement.

Step 6: To add a unique touch of thickness and width across the entire mix, we send our three main subgroups to a return track loaded with custom processors - saturation, EQ, reverb and characterful compression. We’ve exaggerated this return track’s level in the mix, so you can hear its effect - in a real mix scenario, keep anything like this at a much lower level.